HOCKEY POOL: Ready for Round 2

That puts a bit of a dent in my hockey pool. 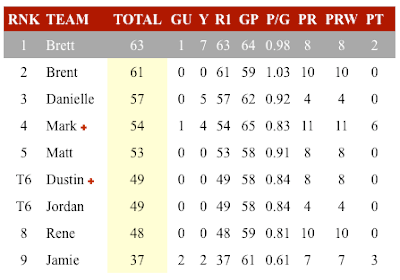 I mentioned how I hated my team originally. I'm actually quite surprised that I'm sitting in first.

I doubt I'll stay there long.

I ended up losing 5 players in the first round. Ovechkin and Poti (massive disappointment), Doughty and Smyth (could have....could have), and Derek Roy (Buffalo really performed poorly).

Only a handful of Detroit guys and Mike Richards can take me to the promise land.

The guy in second right now lost ONE PLAYER...and he was a defenceman. Not good. I need more Halak magic (as he has a lot of Pens).

Such a fine line this year in the playoffs. Colorado, Nashville, and LA came close to really making this a wide open pool.

We'll see where things go in round two. Go Wings!
Posted by bamlinden at 11:56 PM