This installment of 'One Sheet, One Set' includes some cards that I received in a huge trade a couple weeks ago.

For a few insert and jersey cards that have been sitting in my tradebox for years, I was able to snag over 1500 base cards. Most in 10-12 card groupings. Some releases, only 3 or 4 cards....but it's a start.

So far, I have put together about 50 different sheets just from this one trade.

I never thought I'd be so excited to receive base cards.

Here's one of the sets that caught my eye. 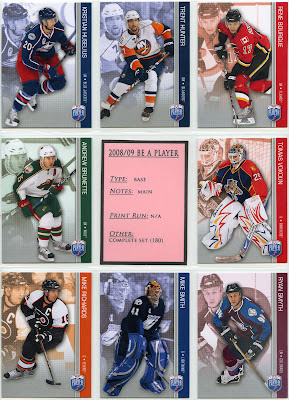 2008/09 Be A Player
This 180 card set comes from a series that has a larger focus on autographed cards than jersey memorabilia.

Single, dual, triple, quad and 'six-pack' autographs really made for a desirable break.

The base cards that accompanied these inserts almost felt like an afterthought. I didn't see too much of them when they first came out (maybe that's why it caught my eye a bit when I was going through all these base cards).

It looks to be a fairly solid checklist (being only 180 cards). There's also a 100 card Rookie subset - nice for those who like fresh faces in their sets. 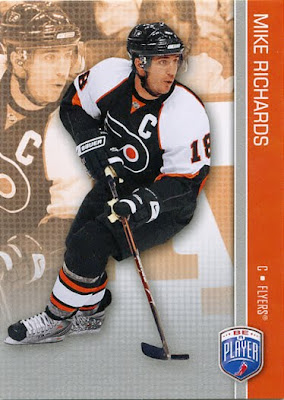 The first thing I noticed when I saw these cards was the vibrant color associated with the team. I like the boldness to be honest. The team color in the right side bar and the tint in the background image really gives the card an immediate team identity.

The right side graphics look pretty basic and I like the font style choices. Simple, yet effective.

The Be A Player logo over the two vertical color bars is a nice simple touch. So far, so good.

The player cutout is fairly stock. Some cards (like the Richards) look good. Others (like the Hunter or the Mike Smith), look a little weird. I like how they went with the drop shadow as opposed to a glow on the player. It really adds depth to the card.

Now the background. As I said earlier, I like the tinted team color in the picture. I kind of like the 'graph paper' square texture as well. The photo selection....is actually OK in this instance. I think though that they could have been a little more dynamic in the difference. Zoom in a little more on the pic. If it were a head and shoulders shot, it would have been perfect. Still, I'm OK with the picture doubling up in this application. 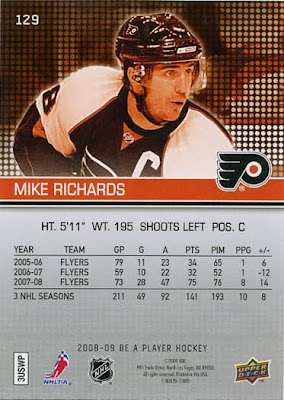 Aarrrgggh! This third usage of the same photo....I do not like it. Here would have been a great opportunity to use a different pic. And putting the color tint on the player just doesn't do it for me. The texture on the background is good, but doesn't feel consistent with the front of the card.

The name bar and team logo are OK. Again, simple and effective. The team logo lacks the drop shadow similar to the BAP logo on the front. Point deduction on that. Here's one thing that bugs me too. I realize that there are registered logos and trademarks and all that, but I hate the little 'R' with a circle in with the logo. It just disrupts the flow way too much. Why is it there? Why isn't it there ALL THE TIME? Like on the actual player jerseys? I say ax it.

The stats are decent. The font style fits the card. Sadly, five years of stats is all you get. That's it. Still a downer for me.

The (what has become) standard indication of what set I'm looking at is on the bottom, along with the 'junk'.

A decent card back, but not as solid as it could have been.

Overall, a pretty good set. One that was fun to look at, mostly because I never really took the time to sift through these cards when it was released a couple years ago.....no Linden in the checklist.

While there is nothing to blow you away, the eye-catching look of the cards alone make this a would-be fun set to build.

Not overly expensive if you can find singles (as opposed to opening packs), and a smaller checklist make this something to consider for those who like to build simple, inexpensive sets.