HOCKEY POOL: V is for Victory!

Well, it was inevitable. This year's hockey pool was a no doubter. I finished with a 165 point cushion (that's almost a month's worth of points). 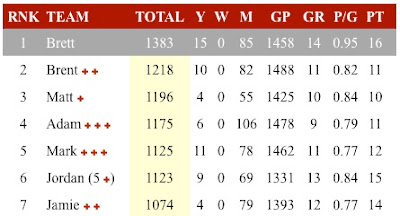 My big guns were my two goalies (Brodeur and Miller), the top d-man in Green and two guys named Stamkos and Malkin.

I had a great supporting cast as well and the injury bug didn't hit nearly as bad as some of the other guys in the pool.

I collected my winnings yesterday and then proceeded to plunk a portion of it into the playoff pool.

One word came to mind after that draft...
NASTY!

Pulling the double won't be an easy task.

I'll post my team in the next day or two.
Posted by bamlinden at 8:03 AM