This past weekend brought about a trip to the local card show. It was the last monthly show of the season. I was happy to pick up a few items for my various collections.

A few of these cards included some vintage sets and some vintage players...in my opinion, the nicest stuff I picked up all weekend.

This set is one of my favorites as it celebrates the best the game has ever seen. 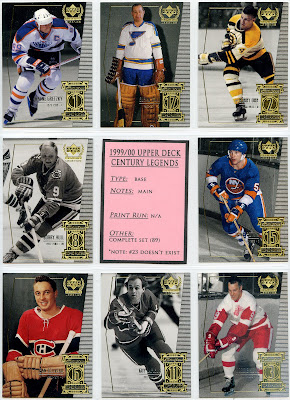 1999/00 Upper Deck
Century Legends
The first 50 cards in the set commemorates the Top 50 players of all-time as announced by the Sporting News earlier that year. They released a great looking magazine celebrating the best of the best.

Actually, it was only 49 cards as card #23 was not printed. It was supposed to be of Ken Dryden. Not sure of the reason why he was not included in the set. I don't know if it had to do with the omission of memorabilia /autographs from Dryden at the time or not. It's a shame as I feel it leaves a bigger hole that just "missing a card". 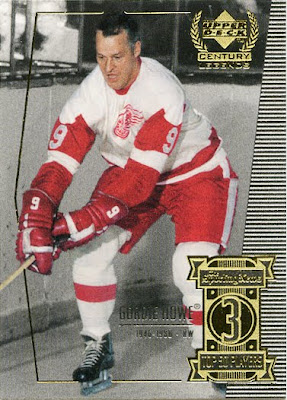 The front of the card has a nice look to it. A gold border around the three sides, separating the background from the player of note. The Upper Deck Logo and Century Legends icon in the top right corner is a nice finisher.

The right side of the card has an angled silver lined pattern (that looks a lot better in person than on the scanned card), the position number on the list and the name and years played along with the position.

I like how all the elements blend together. Not overly complex. A nice, sharp simple design. The lack of color in the design element lends nicely to the fact that the photo has just the foreground in color while the background is monotone. 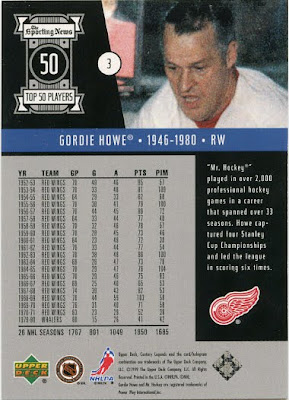 The back of the card marries nicely with the front. Again, the big 'Top 50 Players' logo. A head shot of the player (losing points for the re-use of the same photo on the front). A nice simple blue border to indicate the name, years and position.

Note: I love how Gordie Howe's name is now a registered trademark. What gives there? Something to do with the 'Mr. Hockey' thing I suppose.

I appreciate the full stats and the fast fact on the side. The team logo finishes out the bulk of the card (say for the obligatory logos and 'mice-type' at the bottom....yuck.

While the back is clean and free from a lot of excess, it could have had more of the 'distinguishability'....is that a word??? as the front of the card has.

Overall, the set is real sharp. Of course it is the ultimate in player selection and some of the photos look really nice. A good overall design puts this as a desirable set to have.

What's nicer is that the release came with some fantastic inserts. A parallel set numbered out of 100, one of the nicest signature sets of all time (23 card featuring the best of all-time) and a 'Jerseys of the Century' set that has only a few cards and incredible odds of pulling, but c'mon....jersey cards of the games greatest are always desirable.

A nice set to build...a better set to sit back and appreciate once built.