Well, it's going to be a short but sweet Linden card this week. 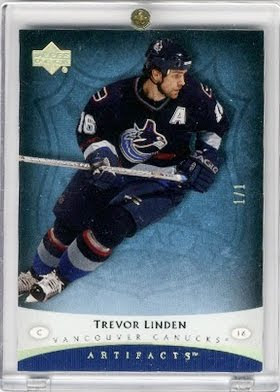 2005/06 Upper Deck
Artifacts Spectrum 1/1
I'll admit, the reason I'm going with this card is because it was the only other Linden card I currently have scanned.

That said, I'm quite proud of it.

I acquired this one in a trade with another Linden collector. I had a dual jersey 1/1 card and he was very interested in it. He offered up this one. Hey, a 1/1 is a 1/1....I had no problems at all with the trade.

2005/06 marked the last year where Trevor had what I would consider a 'significant' number of cards to chase. In the few years since, the numbers have dwindled.

This year, he only has 1 item (in my opinion). It's a Panini sticker that has his retired jersey number on it. Yes, it's a technicality, but at this point, I'll take whatever I can get.
Posted by bamlinden at 9:13 PM