There's some talk this week about the Calgary Flames and the justification of building a new arena. The Flames organization feels that the current arena is out of date. A new rink would spawn more interest in the team as well as a multitude of other events (concerts, shows, sporting events, etc.).

I for one am having a hard time thinking that the Saddledome is already out of date.

Finished in 1983, the 'Olympic Saddledome', as it was originally known, was constructed for the new NHL team in town - the Calgary Flames (coming from Atlanta in 1980) as well as the upcoming Winter Olympic Games in 1988.

It received a major facelift in the mid-90's and has been a staple of the downtown environment. The Calgary Stampede, concerts, tourism and infrastructure all take into consideration this distinctly recognizable place.

So, where am I going with all of this?

Well, I was 11 years old when I got to go to the Saddledome for the first time. It was for what would be one of the best hockey games I was ever (and will ever) be at. 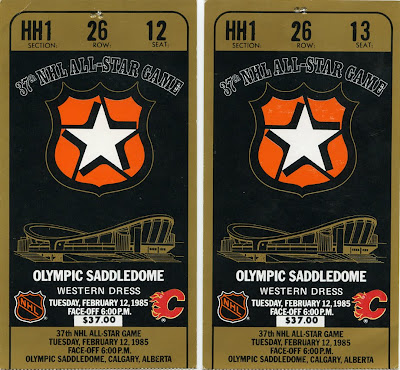 The 1985 NHL All-Star game was THE game to be at if you lived in Calgary back then. The lineup of stars participating in the game that year was a who's who.

There were a few players that I couldn't figure out why they were in the game. Players like Phil Russell, Mike Ramsey, Miroslav Frycer and Steve Payne. I later found out that a player from each NHL team needed to be represented at the game.

The Wales Conference beat out the Campbell Conference 6-4 (yup, that's it) and Mario Lemieux won MVP honors with 2 goals and an assist.


Wow! I honestly didn't think I'd find anything. Cool! 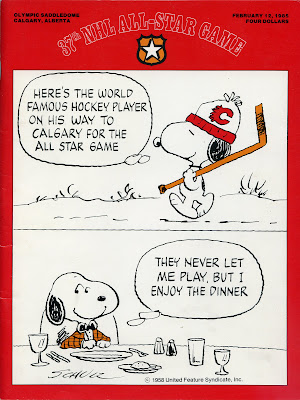 Here's the program I've carefully kept all of these years.

I was going to get everything matted and framed (if I could find a couple pictures and stuff), but it never came to be.

At one time, I had the All-Star Game belt buckle (which was pretty cool I thought...I was going to add it to the framing). I also bought this item which I still have in my possession. 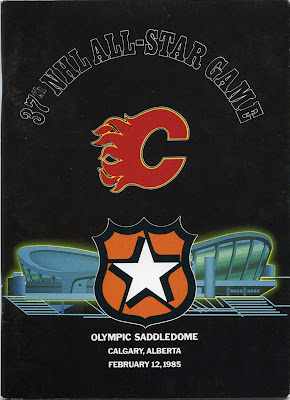 This is the media guide for the event. It's full of stats and interesting facts. No photos though (bummer).

The best part of these mementos is that it brings back fond memories of going to the game with my dad. I still remember when he came home with the tickets. It was the day of the game and was a real last second decision on his part. I never appreciated the fact that I got to go see this game (I just thought it was going to be like any other game...boy was I wrong.

I still collect cards to this day partially because of the enjoyment of reliving my youth and memories of my dad.
Posted by bamlinden at 7:58 AM