STASHED IN THE CLOSET - The Man Behind The Mask Comic

Years ago, I had the idea for a documentary. I thought it would be cool to see a 4 or 5-part series on the history of the goalie mask.

From its inception in 1959 all the way up to today, the mask has intrigued me. The evolution, the designs, the personal significance and the uniqueness. It's something that has always stuck with me.

At the time I thought of this idea (which would have been about 10 years ago) I thought it would be cool to have it completed so it could air Nov. 1, 2009 - the 50th anniversary of Jacques Plante donning the mask for the first time.

Well, the doc didn't get off the ground, but I can appreciate that there have been both books and docs released to focus on this great subject.

In my research and collecting of all things goalie mask, I came across this neat comic book released back in 1996. 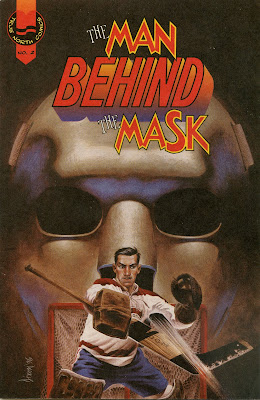 It was illustrated by Michael Dixon and was released through McDonald's chains as part of a 4-comic series. The series was an adaptation of the famous 'Heritage Minutes' (if you live here in Canada, you'll know what I mean). 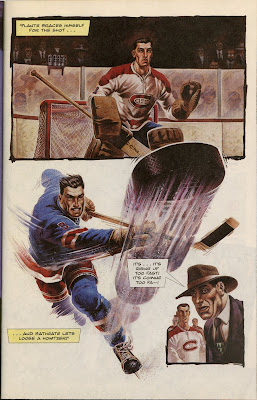 This comic tells the story of Jacques Plante, goaltender for the Montreal Canadiens, and how he came to wear the goalie mask in a game for the first time in 1959.

For those who don't know the story, Plante had been practicing with the mask but would be told not to wear it in games by coach Toe Blake. In a game against the New York Rangers, center Andy Bathgate came down and fired a shot that nailed Plante square in the face. Just three minutes into the game, play was halted while Plante went off for stitches. 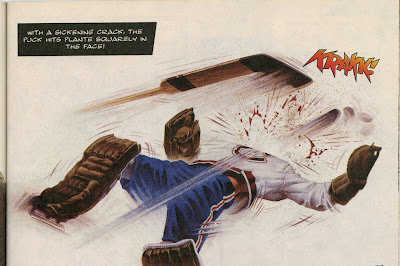 You have to remember, back in those days, there were no backup goalies....so the teams and fans waited. After getting repairs done to close up the gash on his face, Plante lets coach Blake know that he would not be going back into the game unless he wore his mask.

Eventually succumbing to Jacques' demand, Blake allows him to wear it. And when Plante returned to the ice with his mask, fans in the crowd were confused and even frightened by the crude homemade contraption being worn by the Habs netminder. 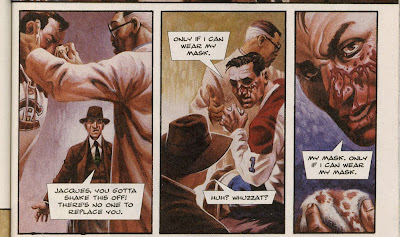 That all changed quickly when Plante went on to win the game 3-1.

After the game, Plante refused to get rid of the mask. While coach Blake tried to convince Plante he didn't need it, Plante's play in net eventually ended the discussion. 18 straight wins with the mask.

The mask would become a permanent part of professional hockey. 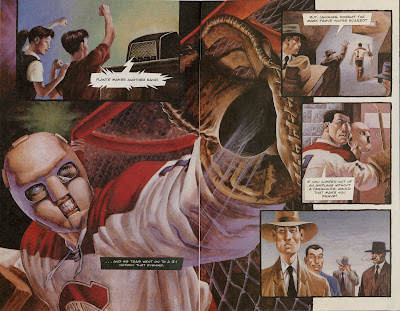 It took a while for other goalies to follow suit. Many of his peers and opponents called Plante a coward for wearing the mask. But Jacques wouldn't quiver and within a decade, most goalies were wearing the mask on a regular basis.

Today, goalies wouldn't even think of going into the crease without a mask and many of the tenders credit the mask for extending their careers.

It's a great part of hockey history, and this comic book captures it really well. The illustrations are slick and the story is simple in its delivery.

For those who have never seen the 'Heritage Minutes' segment, here it is...

Posted by bamlinden at 7:32 PM