'Action'. It's a subjective word. A word with many meanings. It can evoke strong thoughts and exciting moments. Make you gasp or do a double-take. It can make you smile and it can make you cringe.

'Action' to me is a positive thing. But when it comes to this set, there's only one thing I'm positive about. 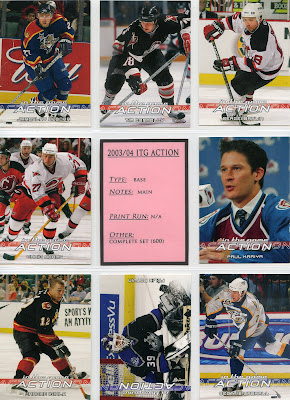 2003/04 In The Game Action
There must be a reason why this set was called 'Action'. I'm still trying to figure it out. An 'after-thought' set from the mid-2000's, this product hardly excites.

The monstrous 600-card set was the largest to be released that year and it disappointed in a great number of areas. Player selection, overall design and just a pure lack of 'Action'.

A set can be big and still be desirable. A set can have a simple design and still catch your eye. But a set can't be passive and call itself 'Action'. 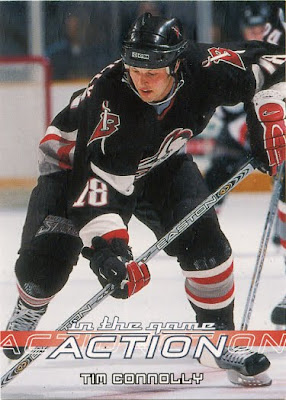 The front of the card is about as simple as you can make it (remember now, we're in the mid 2000's, not the early 90's or the mid 50's). While Upper Deck's signature release was utilizing a very 'graphic-less' design, ITG's foray into the minimalist look is a complete swing-and-a-miss.

Borderless, the photo immediately stands out. That's bad if the photo sucks. 'Action' should be just that. The best action shot possible. Not your overused 'skate-up-the-ice' shot. Or how many times do we have to see somebody turn right or left...while coasting. Those photos are littered in this release. I can go to Getty Images and in five seconds find a dozen photos that would put these to shame. 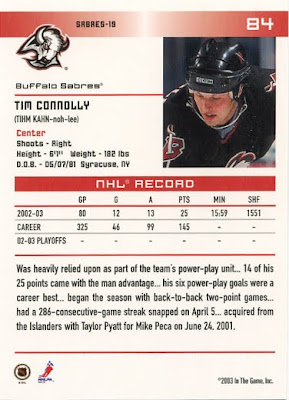 The back is not much better. The terrible font style is continued on the back, the same uninspired photo that wastes the space on the front of the card is copy and pasted on the back and the overall lack of color or style is boredom at its best.

Tons of wasted space, incomplete stat listings and an overabundance of fast facts really makes me want to just put this sheet in the binder and be done with it.

The only points I'd really give this card is the interesting lack of logos at the bottom of the card. Why is that? For an 'Action' card, shouldn't the bottom be super busy with logos and copyrights? Maybe they just got even lazier. Whatever.

Overall, this is a product to avoid (unless you can get it for free....which might not be too difficult). The set is pretty worthless with the highest valued single being the breakout rookie card of Peter Sejna. Who? Yup.

'Action' is a positive thing.....and I'm positive - this set is terrible!