TO THE BIKE SPOKES!!! - Ron Duguay

When I was a kid, Ron Duguay was cool. He had the rockstar hair and attitude to match.

The number of players in the league without helmets was dwindling, but Duguay continued to let his locks flow.

He had a pretty solid stint with the Rangers (even scored 40 goals one year), but in 1983, he was traded to the Detroit Red Wings.

O-Pee-Chee, in decided to abandon the 'Traded to...' or 'Now with...' text on the card front like they had been in years past and instead tried something different. 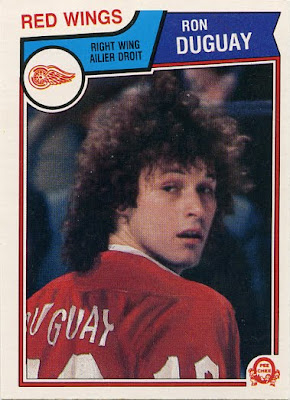 1983/84 O-Pee-Chee
#121 Ron Duguay
Not even close. What a terrible paint job. It could have been worse though. Imagine if the artist (and I use the term loosely) had to do the Wings' logo.

This was standard practice for OPC over the next 6-7 years. Take a closeup shot of a player and paint a jersey, helmet, even a mask on him.

Still, the rockstar perm was awesome.

This card got me thinking - what would Duguay look like without it?

Well, it was a year or two later when I started discovering cards pre-1980 (that's when I started collecting). I came across this beauty and was floored. 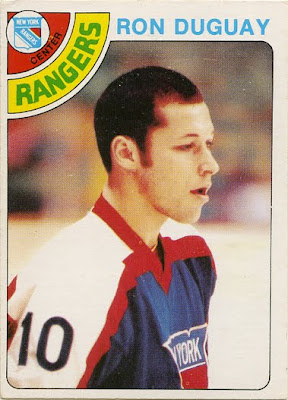 What a great photo. Part of me thinks it's another person's hair painted on him.

Sadly, Ron Duguay's hair isn't as cool as it was back in the day.....unless your name is Martin Handzus. 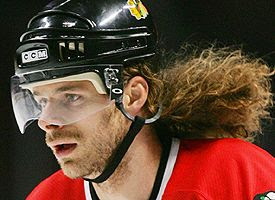 If only he could let his locks flow free as well.

Ron Duguay, your hair and your painted on jersey can go straight....