This weekend was the Bossa Spring Sports Collectibles Show here in Calgary and I have had these past two days marked on my calendar for months.

It's a great chance to pickup some new pieces for my various collections. With dealers coming in from out of town, there's some fresh cardboard out on the tables and a number of locals bring out just a little more than normal.

To top it off, in-person signings from hockey greats. This year it was Larry Robinson on the Saturday and Jean Beliveau today. Was it ever cool to see those two guys. With all the health problems Beliveau has had over the past few years, I gotta say - he looks great. And is without a doubt one of the nicest guys I've ever met.

They say he's the classiest.....that's an understatement.

Now on to some pickups.

One of the projects that has been slowly progressing has been my 1 vs. 100 set. This show may have produced one of the single biggest hauls towards completion. Some great additions if I do say so myself. 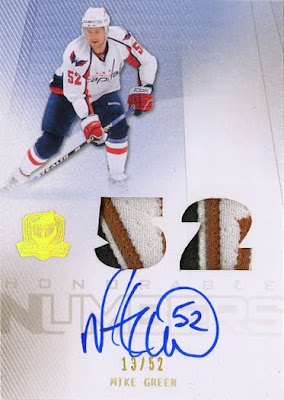 2009/10 The Cup
Honorable Numbers
#HN-MG Mike Green /52
I paid a little more than I wanted to for this card, but ever since seeing these cards - I've wanted one for my project. The patches are really nice and I like Green's autograph. Hard signed - you can't beat that. 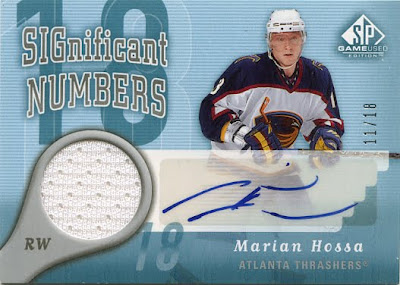 2005/06 SP Game Used
Significant Numbers
#SN-HO Marian Hossa /18
Another card that I hummed and hawed at. It was priced quite high for what I was looking to pay, and we almost made a trade, but it was early Sunday when my look of disinterest turned into a sudden drop in price. I jumped at it and was glad I did. 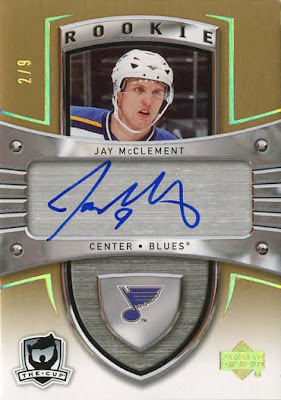 2005/06 The Cup
Rookie Gold
#182 Jay McClement /9
This was a late purchase on the Saturday. The guy had TWO of these cards. Having never purchased a Gold Rookie from this year, I wasn't sure what the going rate on them were. He had it priced at $125. I knew I wasn't going to pay that price, but after talking to him for a bit realized that this guy was bang on when it comes to bartering. He basically said that he wanted a fair price. I can respect that.

I told him that I had no clue what a card like this might barter down to so rather than make an offer that might come off as insulting, I'd pass. He then said that this card would normally go cheap. He fired off a number that was within a few bucks of what I had in mind.

And with that, I was the new owner of a nice rare card for the project. I'm really excited to have landed this one. 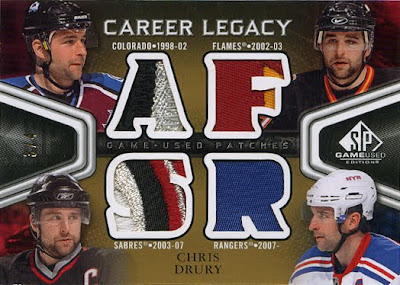 2010/11 SP Game Used
Career Legacy
#CL4P-CD Chris Drury /4
Last, but not least is this gorgeous piece. This card fits perfectly into what I'm looking for with this project. Drury is not a big name, the card is unique to anything else I own and the price was right.

This card was just recently pulled bu the dealer and he was not looking for a ton of dough. He asked what a fair price would be and we quickly came to a deal. Again, really happy to add this one.

So that's 4 more cards to the collection. And a pair of them numbered to under 10. Just a small portion of the pickups I made at this fantastic show.

Only 12 more months to go before the next one.