Custom Creations - What The????

That's right! It's been almost a full year since I have built any custom cut autograph cards. Brutal if you ask me.

This year has gone by in a flash and time for customs just hasn't been there like I would have hoped.

That said, I made it a higher priority to work on some customs during my vacation time....and I'm glad I did.

I've hammered down two more designs for a (very patient) person whom I've done some cut autos in the past for. Narrowing the number of customs remaining down to 7. Maybe one day....maybe one day. :)

The first of the two customs I'll show you is a bit of a new attempt for me when it comes to cut autos. 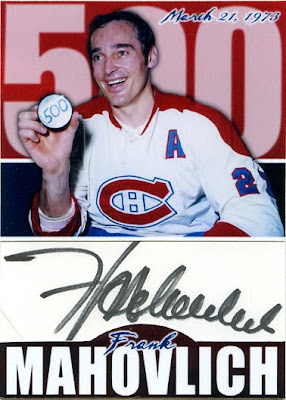 This Frank Mahovlich signature was so wide that I eliminated the side borders of the card. The autograph goes right to the edge.

If you're wondering why there seems to be a second piece of paper in the bottom left corner, it's because there is. The original signature was written on an angle of the paper that made it tougher to cut out for a shape. I think it works. 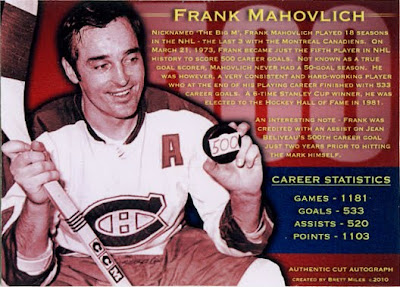 Here's the back...I know some of you are interested in seeing the backs of my creations as well.

The second card was one that made me switch up the color palette a bit. I'd been stuck in red world and now I moved over to blues. 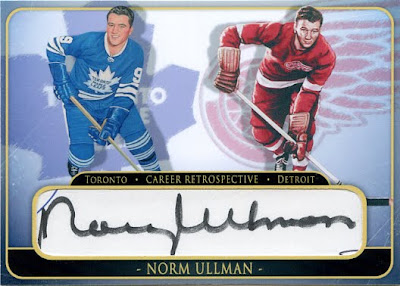 This Norm Ullman has a bit of a retro feel. Something I wanted to do after choosing the pics I'd end up using.

The auto was a tough cut on this one as there were a couple other signatures really close to Ullman's. I had to cut it almost the exact same size as the hole it would be revealed in. It took some trial and error, but I figured it out. 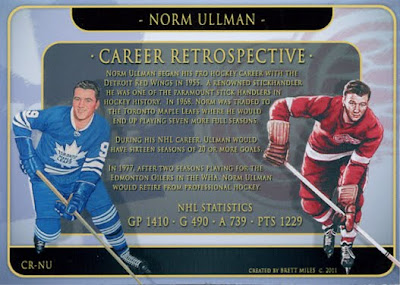 I made sure to use those gold border elements on the back of the card and I stayed with the same pics because there weren't too many other really nice photos I could find that worked.

These will be packaged up and mailed off tomorrow. I've still got a ways to go, but I feel a little less guilty for pushing these aside for as long as I have.

Hopefully I will have some more customs to show off sooner than later.

There's one special custom that I am still mulling over. I will be making sure it gets done before the start of the fall hockey season.