I'm noticing a trend when it comes to the cards I've talked about in previous 'Cardboard Photography' posts. 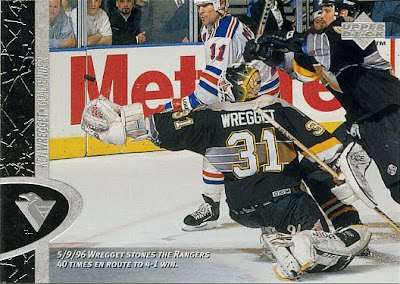 Now, the caption at the bottom says "Wregget stones the Rangers 40 times en route to 4-1 win". So I'm assuming this photo ends up as either a save or the puck goes wide. I'm hard pressed to think Upper Deck would use the one goal New York scored as the picture used in a stellar goaltending performance.

The one small beef I have about this card is that you have very little reference as to where the net is. You can kind of make out the crease, and it appears that you can make out the shadow of the mesh in the netting. But a post or crossbar would have been nice.

By loosening the shot a bit, you'd also be able to eliminate cutting off Messier's head (which I found funny anyways).

I really like the 'zero blur', razor sharp image captured here. From Wregget flopping back to make the save, to Moose licking his chops at a loose puck (and potential garbage goal), to the fans in the crowd who are seemingly in awe by the action.

I think the shot has got good exposure, decent framing and works well with the layout of the card.

Now if it could only be determined if it was a goal?

An interesting tidbit on the back of the card...Ken led all NHL goaltenders in wins in 1994/95.

Seems harmless enough, but there was something odd about the stats, and the year......it took me a bit, but I figured it out.

That's his BEST season. Ken won 20+ games in a season only 5 times and never cracked more than 25.