While scouring the tables at the local card show this past weekend, I was talking with one of the dealers about a recently released card. That discussion has motivated me to finally write up this post.

Through the decades, card companies have introduced new cards to us hobbyists. New ideas, new concepts. From inserts to jersey cards, autographs to limited print runs, there's always something on the horizon to try and make the hobby feel fresh and exciting.

Sometimes new ideas are far fetched, sometimes they are a dud. Every once in a while though, a new concept is produced that catches my eye and makes me stop and appreciate them. 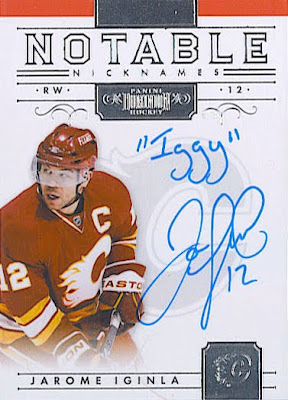 2010/11 Panini Dominion
Notable Nicknames
This was the card that we were talking about. It's one of 10 cards in the new Notable Nicknames Autograph set released by Panini in their Dominion product.

Hard signed and numbered to just 50 copies, I commented that something as simple as Jarome adding "Iggy" to his card immediately places that card in a different light for me.

What I like about it is that it put a bit of light on the individuality of the player.

Do you remember the first time you pulled an autograph card from a pack? I bet it was pretty cool. A new idea...the thought that the player was actually holding on to the very card now in your hands. But year after year of seeing autographs...seeing sticker autographs...over-saturation, it just diminishes the 'specialness' of the autograph card.

Now, by having the player add a little personal touch to the card, that connection to the player is reinforced. 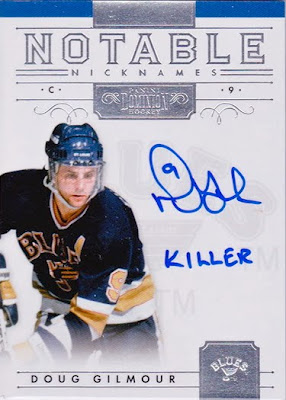 Some of the other cards in the set include this Doug Gilmour favorite of mine. Additionally, the checklist includes Dustin Byfuglien, Felix Potvin, Ed Belfour and Mark Messier. I've seen a Messier....sadly, he didn't grasp the concept - he only signed his name.

The one card in the set I'm looking forward to seeing most is the Jean Beliveau. In addition to his phenomenal signature, I can already appreciate the time and care he would have put towards making this nicknames project the best it can be.

One card in the set had me scratching my head though.... 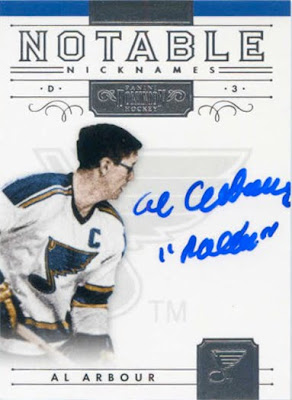 Sadly, I had to do some research to find out Al's nickname. You'll have to do the same too. :) Once you find out....you'll see it.

But this concept is not a new one. Card companies have used this technique in the past and have created some really fun and highly discussed sets. 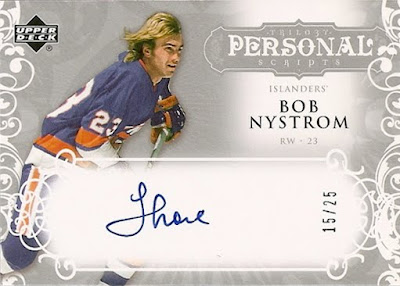 2007/08 Upper Deck Trilogy
Personal Scripts
This Bob Nystrom card from a few years back is one of my favorites. Not only is the photo on the card awesome (I miss the helmet-less days), the simplistic scribe of 'Thor' just punches off the card.

I haven't seen any other cards from this release, but the checklist looks deadly.

Even some of today's stars like Sidney Crosby, Marc-Andre Fleury, Martin St. Louis and Corey Perry.

Now, with this set - 'Personal Scripts' - the idea isn't always about nicknames. Sometimes the player includes when they were inducted into the Hockey Hall of Fame, or if they accomplished something unique.

Still, the idea of making the card more personal is there. 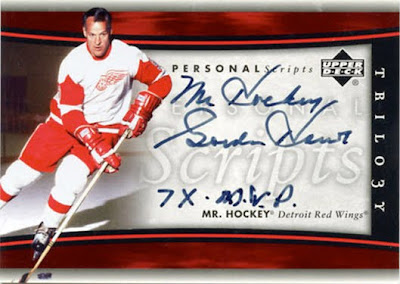 2005/06 Upper Deck Trilogy
Personal Scripts
Trilogy has used this concept in the past more than once. I tracked down this fantastic Gordie Howe card from the same insert set a couple years prior to the Nystrom.

This 21-card set is equally as intriguing as its 07/08 counterpart.

'Mr. Hockey' is so synonymous with Howe that he includes his nickname quite regularly when he signs his cards. You can find a number of examples with a quick search on ebay.

To my earlier point, I think it starts making the inscription a little less special........just a little. :)

2004/05 Upper Deck Legendary Signatures
AKA Autographs
Without question, the granddaddy of the 'Nicknames' concept goes to this stunning collection of cards from 04/05.

Breaking new ground to create this 24-card set, Upper Deck started a buzz with the uniqueness and coolness of this eclectic mix of players.

Where else would you see Al Iafrate and Gump Worsley sit side by side? Tony Twist and Glenn Hall?

I find myself just looking at this set over and over, appreciating each card individually (remembering each of their nicknames just takes me back to the time when they played), but then realizing how cool it is to see a set like this completed (numbered to just 100, it's not impossible, but pretty rare to see a full set).

A great way to cap off this look at one of my favorite concepts to come along on the past decade.

Do you know of any other nickname cards out there?

Do you have any favorite concepts?
Posted by bamlinden at 5:56 AM