Some of you might be asking "Beards? As a concept?"

When it seemed all the avenues of concepts have been exhausted, Upper Deck comes out with a sneaky little parallel set that can be either intriguing, frustrating or flat out boring.

I choose the first one. 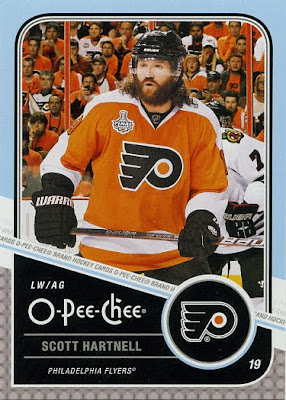 The card looks exactly the same as the regular version say for a couple tweaks. 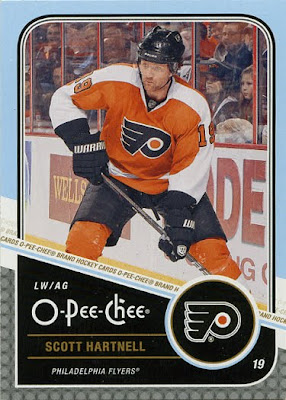 2011/12 O-Pee-Chee
#1 Scott Hartnell
Regular version
First (and most obvious) is the photo. But if you look closely, you'll see that some of the text is a different color. The regular version has gold lettering for the player name and the 'O-Pee-Chee' slashing through the card at the bottom of the photo. The 'Beard' version has this text in silver.

The backs of the cards are exactly the same. There's no serial numbering, no text indication - nothing. 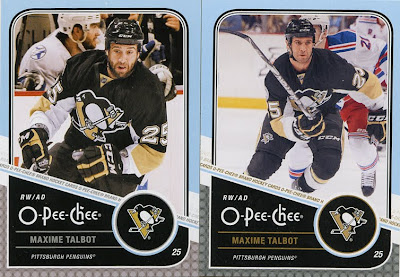 Without a doubt, there are people out there building the set that have no clue about the variation. To many, it might not even matter.

I, on the other hand, would not be able to put a 'Beard' variation in the spot where a regular card should go.

It just doesn't work that way in my world. 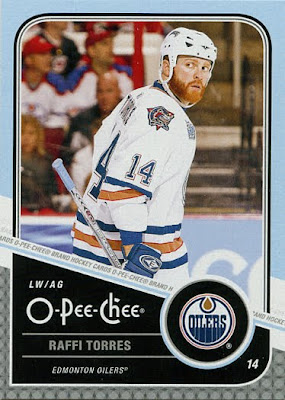 So, how rare are the 'Beard' variations? They are 1:25 packs. Not super rare, but still a good hunt is required to build the full 50-card set at a reasonable price. 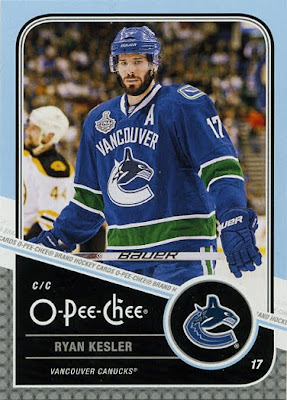 I kind of like this idea. These photos aren't just from 'any' game. They are from the most important games of the season. And there are a number of players who seem to transform into another character once that beard has fully formed.


So, once I discovered this unique concept, I thought to myself if there were other instances of 'facial hair' being a theme for a set.

Believe it or not, it has happened before. 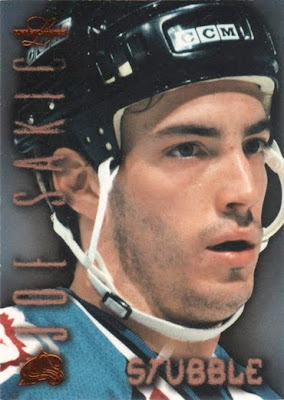 This set was actually inspired by the playoff beard tradition, but was a bit more of a miss as a lot of the photos just don't reflect that sentiment. 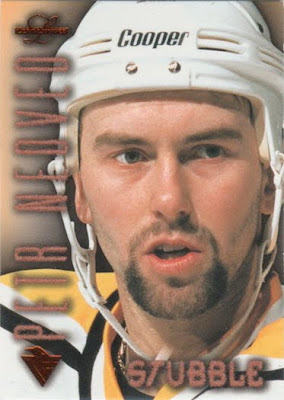 This 20-card insert set did have some big names though. Yzerman, Lemieux, Gretzky and Roy just to name a few. And since they are numbered to 1500 (which at the time was a pretty rare card), they hold half decent value (Gretzky just recently went for about $30 on ebay). 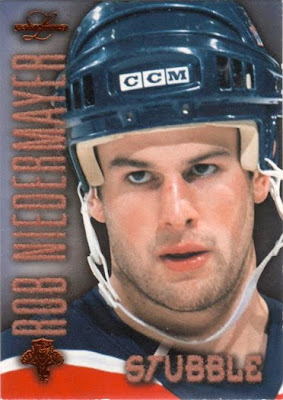 All the card fronts show head shots of players 'sporting' stubble. I think some of these pics are of guys who are just too lazy to shave.

To make things even cheesier, the player name and 'Stubble' text have a fuzzy felt-like texture. It reminds me of books that I read when I was one. 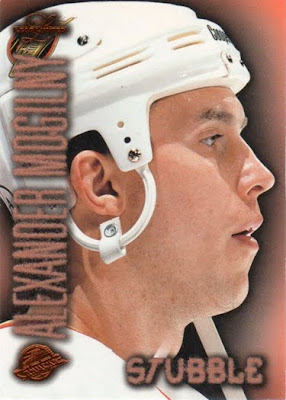 'Stubble'? I think not. This is just a poor inclusion to the set. I don't think I've ever seen Alex grow any sort of beard, goatee, sideburns or moustache. Ever.


Now did someone say - MOUSTACHE?

Thinking about this concept, there was a clear lane to this obvious avenue that I'm sure will soon be gobbled up by a card company.

At least you can say you saw it here first. 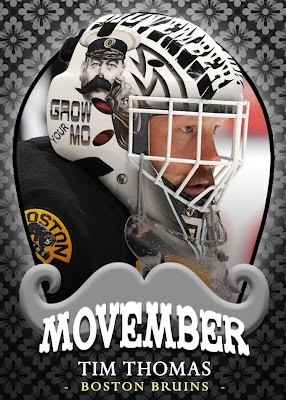 I give you - "The Movember Set"

Again, for those living under a rock, November is the month where us guys refrain from shaving the ol' stache in support of men's health (specifically prostate cancer).

And a bunch of the NHLers have jumped on this ship big time.

You probably saw the Jonas Hiller Movember mask I showcased at the start of the month. But he wasn't the only goalie to get in on the excitement. Tim Thomas had a great looking Movember mask designed as well.

Both the Hiller mask and the Thomas will be raffled (or auctioned....I can't remember which) off with all the proceeds going to support the cause. 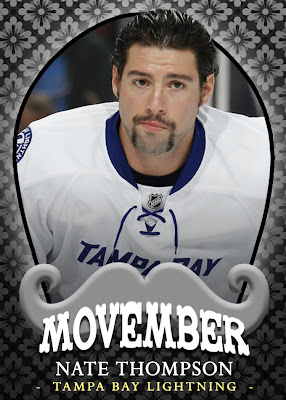 So why not do the same with hockey cards?

I think each team should designate one player to represent their team on a 'Movember' card. Only available in that team's city. Math concludes that this would mean a 30-card set.

I think the initial purchase of the card be set at like $20 bucks with only a limited number of them available (say 1000).

If every card sold in every city and all the money from the cards went to fight prostate cancer, that would be $600,000.

Some people might only want cards from their favorite team or city, some might want to build the set. There are player collectors as well.

And of course, the money would go to a very worthwhile cause.

And think of the fun photos you could come up with. 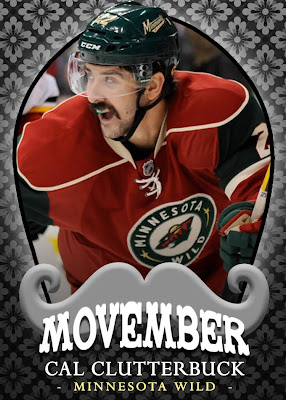 Even better.......his stache was interviewed by NHL.com. Outstanding! 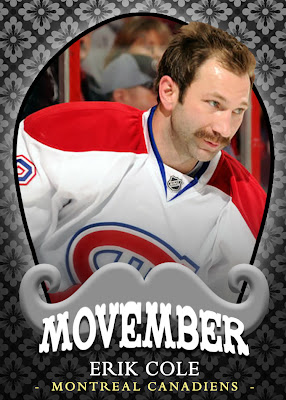 There are guys that just should never be seen in public with a moustache. I think this group of players play for the Habs.

In addition to this nasty caterpillar on Cole's lip, do some hunting for Carey Price's contribution. Yikes! 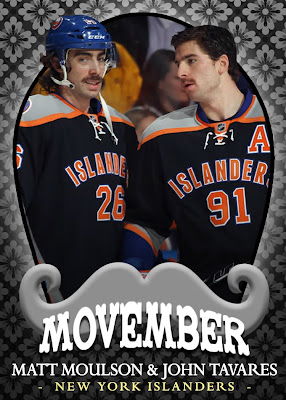 This tandem just made me laugh. Goofy face on Moulson and goofy staches on both. Love it! 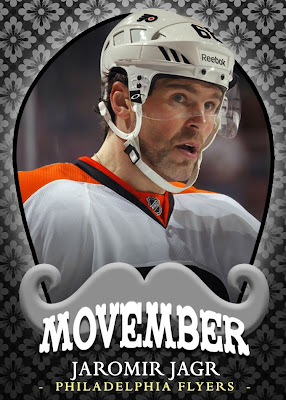 But my favourite might just be Jagr's attempt. It actually suits him. This coming from a guy who had the worst mullet in league history.

Hey, now maybe that should be a card set. No...no, no ,no. Ignore that thought.


Of course, no blog post on facial hair would be complete without a card from this guy. 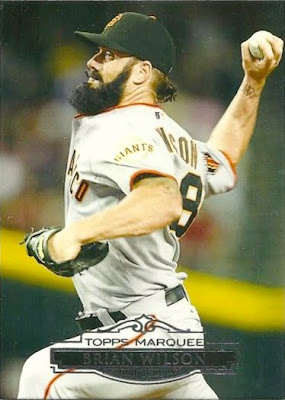 Enough said.
Posted by bamlinden at 12:32 AM