For months I have told myself that during my three weeks off over Christmas - I would work on some custom cards that have been on my plate for far too long.

To me, creating a custom card is more than just slapping together some pictures, logos and team colors. I go through revision after revision, refining my designs (and sometimes re-working them completely).

I hate the thought of "First draft = final draft".

So I've spent the day in front of my computer working on some concepts. Since my vacation started, I have finalized a couple cards. 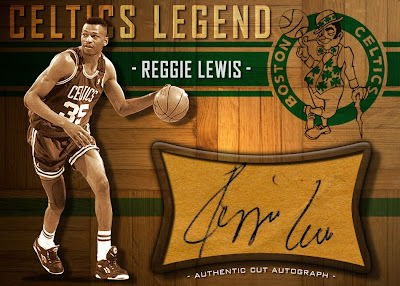 This first one is a cut auto of Celtics star Reggie Lewis. Reggie was well on his way to super-stardom before he collapsed on the court and passed away at the terribly young age of 27.

I'm making this one for Casey over at Drop The Gloves. He mentioned that he had gotten his autograph during a chance meeting and wanted to have a better 'display' for it.

The toughest part with these cut signature cards is getting a nice clean cutout window for the autograph to sit in. I normally use a swivel exacto blade and/or precision scissors.

To this point, neither one has quite done the job for me. I'm anticipating a number of 'trial & error' sessions before I give this the slam dunk.


The next card is for a very patient person. How patient? He sent me a bunch of stuff to turn into cut cards over 3 years ago. You heard me - THREE YEARS.

Now in that time, I have created a number of cards which stand as some of my favorites.

From a set of golf cut autos

to some Montreal legends

to a Gilles Gilbert

and a few others. So I've been keeping busy.

But there are still a few more autos in his stash as well as one last ticket stub card (which I am going to get done before I go back to work).

Here's the first card I've created of the current ones he'll be getting... 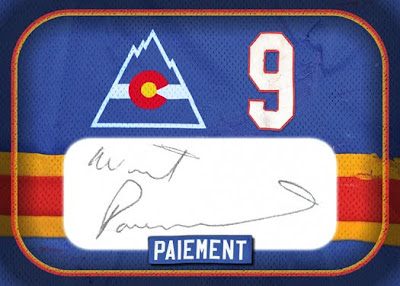 I've always remembered Wilf Paiement as a Colorado Rockies player. But try finding photos of him in that uniform.

So I thought I'd try something different. I like the way this one is heading. I still have the back to do, but I really like the retro-type feel this card has. And the Rockies colors are great for an eye-catching card.

So that's what I've been doing today. Stay tuned....I plan on having at least one more show & tell in the next week or so.
Posted by bamlinden at 6:45 PM