'DID YOU KNOW' - Now With Jets

Here's the card that really spawned the idea of this 'Did You Know' series.

A friend of mine pointed out (what looked like) an oddity on this Bobby Hull card and asked if I could look into it. And you know, until I saw a scan, I can say I never really noticed the detail on the card. 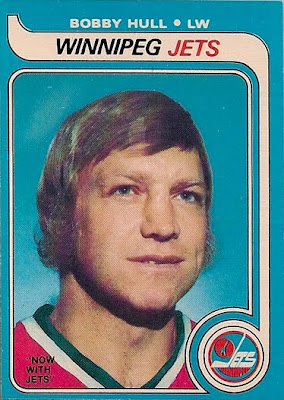 DID YOU KNOW: Bobby Hull (who played his entire WHA career for the Winnipeg Jets) was chosen by the Jets in the 1979 NHL/WHA Expansion Draft.

Wait.....how is that possible? If he played with the Jets, how could he be chosen by the Jets?

A lot of the players in the WHA also had their rights held by NHL teams. For example, the St. Louis Blues had the NHL rights to Mike Liut while he played for the WHA's Cincinnati Stingers. The Atlanta Flames had the NHL rights to Kent Nilsson while he played for the Jets in the WHA. I guess going to the 'rival league' was not as much of a 'clean cut' as many thought it was.

When the WHA folded in 1979, 4 teams merged with the NHL (Edmonton Oilers, Hartford Whalers, Quebec Nordiques and Winnipeg Jets). Each incoming franchise was only able to protect up to 2 skaters and 2 goalies from the other NHL teams reclaiming their players (as many of them had NHL rights) before an expansion draft was held to fill out the rosters of the four new NHL teams.

Bobby Hull was not one of the players protected by Winnipeg.

As a result, the Chicago Black Hawks decided to reclaim the 40-year-old Hull and bring him back to the team that made him an icon in the NHL.

But that was only on paper, because during the 1979 Expansion Draft (held after this 'reclaiming' process), the Winnipeg Jets used their third pick to draft....you guessed it, Bobby Hull from the Chicago Black Hawks.

That's what the WHA does.

So, the fact it says "Now with Jets" on Bobby's 1979/80 hockey card might look weird, it's completely accurate.

Now you know.
Posted by bamlinden at 9:12 PM