A few weeks back I bought a box full of 90's inserts. Cards that once held some pretty high value (and in a few cases still do) as well as high desirability.

Those days came and went. For years I had no interest in these parallels or subsets. But with the creation of my 'One Sheet, One Set' project, I'm more than interested when a pile of inserts (with a cheap price tag) presents itself to me.

This sheet is probably the one that I was most excited to build. I remember these cards and always thought they were super rare.....and super expensive.

But when you can pick them up for a quarter a piece.....sure I'll take eight of them. 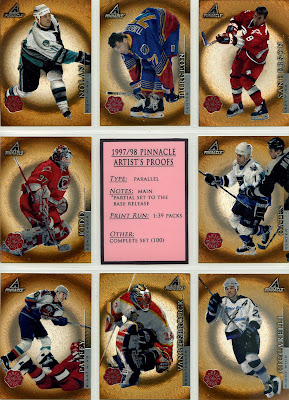 They are a stark contrast to their regular card counterparts. Gone are the photo backgrounds allowing the featured player to be essentially the only thing of focus (most of the time.....there are some that look really weird though without the complete photo context in sight).

Now not all the cards in the base set had an Artist's Proof counterpart (no Linden.....fingersnap). Just a 100-card parallel set, more than enough for people to get their fill of high-end parallels.

Inserted 1:39 packs, this was a pretty tough item to pull. And building a set - quite a daunting task. 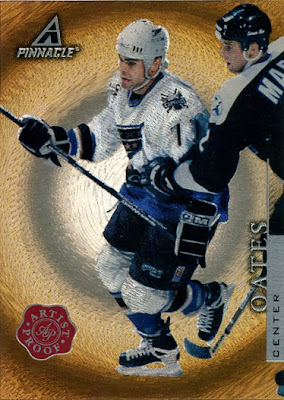 Which when you peel back a couple layers is not nearly as impressive.

Yes, the gold shiny cards are nice. But the design of these cards were bland to begin with. No border of any sort, just the player's last name and position along the right hand side and the Pinnacle logo in the top left.

The only thing added is the Artist's Proof stamp in the lower left, which for some reason I love. It makes the card feel special - like I've got my hands on something I don't want to get rid of.

That leaves the bulk of the focus to the photograph. This is where the wheels fall off.

This was a year where Pinnacle really missed the mark with their photography. Blurry photos, pics that were a little blown out, grainy and just not overly exciting when it came to action. It just didn't work.

Then compound the problem by taking a lot of the context out of the photo and placing a reflective gold surface on it. You don't really know what's going on in some of the pics.

Now if you wanted to do an Artist's Proof set, why wouldn't you base your design and photography around it rather than saying "Well, whatever.....they are what they are".

Pinnacle took a bad photo and made it worse. Way to go.

Not much else to say about the front of the card. Let's see if the back can pick up the slack. 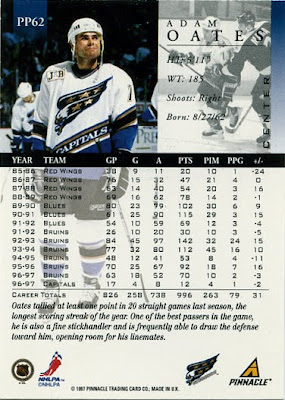 Lots to go through here, so stay with me.

First impression - they tried to do too much. There's bits I like, but it feels a little disjointed.

The background consists of two photos. One larger color pic taking up the space on the left, and a smaller black & white photo (the same one used on the card front) in the upper right. Simply put, the smaller one could go completely. It really just makes the card back look busier than it needs to be.

The photo on the left is a nice idea - having the top part clean and featured while the bottom half is faded to provide background texture for the stats.

The photo selection and quality is average at best, often lower than what I'd be expecting. That's what really sticks out to me. It's unfortunate because a better photo selecting process all around and this product could go from an average set to a highly desirable one.

The player name, position and individual stats appear on the black and white photo - and are tough to read. Could be completely avoided.

The card number appears in the upper left and works well for me. The color fade into the photo is a nice subtle effect. But minimal points are won if this is the highlight of the card back.

That takes us to the stats. They're laid out well, a little tough to read, but complete.

For players that have just a couple years under their belt, a longer bio is written up to fill the space. That's how it should be.

If the player has been around a long time, there might be no bio. That's ok too.

The bios themselves are not too poorly written. It's a thankless job coming up with a blurb for each player - and a different one at that for every card they appear on in various sets each year.

That said - I feel this bio writing is like an artform. Those who do it well paint a picture worth looking at. Those who don't.....well they don't get many views at the gallery.

The ever popular batch of logos sit along the bottom of the card. Once again - waste of space due to size. Make 'em tiny. We all know what the stuff says.

So can a card be desirable if the aesthetics of it is unpleasing? Yup. This set proves it.

Nothing to write home about design-wise, but I love the fact that I can brag about having a few of them in my collection. They're just cool.

But cool doesn't score you points here either.