I'm nearing the end of my 5-week work marathon.  It's been some long days, but at the same time - it's been fun.  I think it comes from knowing that there's a group of us all in the same boat.  And we see this daunting challenge ahead of us that we know we can hit.  Seeing the bar get raised and then working towards exceeding it can be a real motivator....even when you've been working long, hard days.

That said, the break will be a welcomed one.  It won't occur until the end of the month, but things get back to a more normal pace starting next week.

Seeing as I had a couple hours of relaxing tonight, I thought I'd share a recent box break.  This box came as a result of the recent lull in my Linden collecting.  I think the mild boredom I was experiencing made me cave when I took my nephew to the local card store. 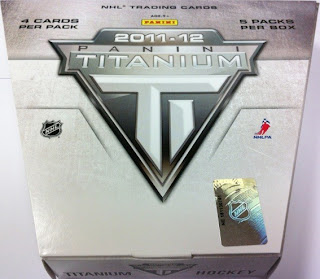 So I knew that my guy Linden wasn't in this product and I knew that the price point vs. return wasn't optimal, but it was new product.....and my nephew liked the shape of the box.

I let him open up the box.  Now I knew there would only be 5 packs of cards inside (since I read the box), but my nephew didn't.  He opened the box expecting more than the "less than impressive" amount of packs to rip.  He let out a laugh and we proceeded to open them. 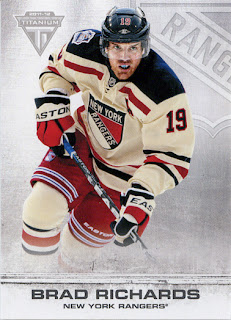 I tried to impress on him that the base cards can be enjoyable even when they are surrounded by thick, jersey-laden hits.  He didn't seem to buy that.

That said, I like the looks of the base set.  The treatment to the photo gives it a slight "drawn" look and the simplicity and boldness really shines through. 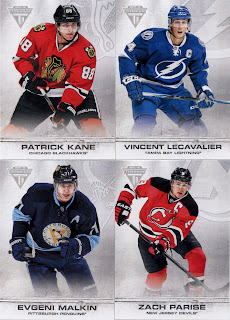 It's a 100-card base set and I ended up with a whopping 14 base cards.  Math dictates that there were 6 hits in my box. 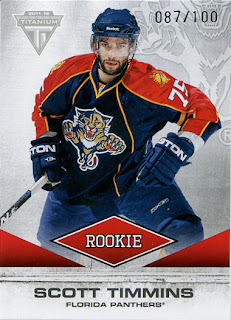 I don't know if you would consider this a hit, but it's different so it gets its own scan.  My nephew wasn't impressed......neither was I. 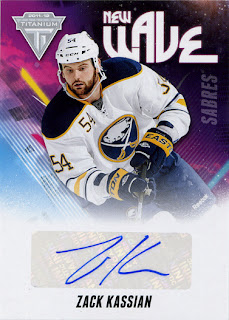 He pulled an autograph out of one of the packs he opened.  I could tell he was again a little underwhelmed.  Can't blame him....look at that feeble attempt at a signature.

We made fun of it. 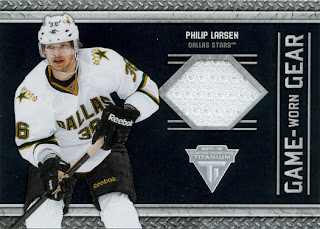 My nephew thought this card looks cool.  It was a thicker card and it had a piece of jersey in it.

I saw it as a nice way to dress up a boring white swatch.  Could be worse I guess (but not by much). 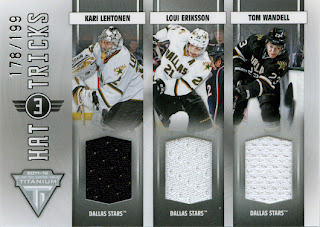 Is it me or did I hit the Dallas Stars box?  We both took a moment to enjoy this card.  He thought it was pretty smart to have a few pieces of jersey on the same card.  Makes it better.....right? 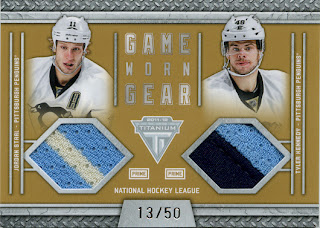 This dual game-worn gear (prime) card has a great look to it.  Thick patches (with a seam bulging out of the Kennedy piece) and multi-colored to boot.  This card got us excited at what the final couple packs might hold.

We both slowly opened the top of our respective packs.  We were both excited to see some super thick cards inside.

He opened his up first (I have a tad more patience). 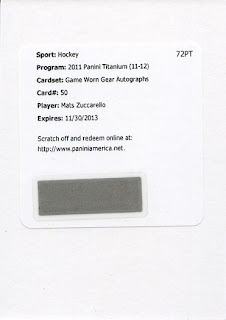 Swing and a miss.

This card to a 10-year-old is about as boring as it gets.  Sure it's going to end up being a nice jersey/auto piece, but to him it's just words.

A bit of a disappointment.  But there was still my pack.

I start to tell him about how some of the best cards in the product are the really thick cards.  Could it be a shield?  Maybe some crazy piece of memorabilia?  Even a booklet? 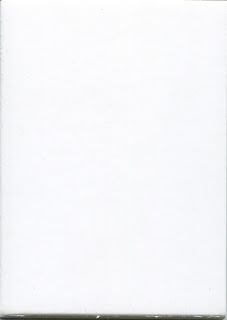 And my nephew got the last laugh.

He was sure I got ripped off.  I had to explain the concept of decoys and how they  get inserted into packs to keep people from searching for the hits in a box.

After a couple more laughs, reality set in.  Underwhelmed and shaking my head.

I really gotta stop buying spur of the moment.

I started to think about the Linden (or Lindens) I could have picked up with the dough I just blew.

But then I realized that my nephew and I had a blast and that really dampened the blow.  Shoot, I'm even going to keep the decoy.  It'll be a great reminder.

In more way than one.
Posted by bamlinden at 9:37 PM