RAISE THE CUP - A Great Gift

It's been a slow last week and a half since my 30 in 30 completion.  There haven't been too many Linden card arrivals and only a couple things in general worth posting.  That said, I fully expect things to pick up[ over the rest of the month.

The Toronto Fall Expo was this past weekend and with it the release of In The Game's newest product - Superlative III.  I did the math....20 Linden cards to chase.  That's right - TWENTY.

For a moment I was pretty bummed.  Why so many?  Why couldn't it be 6 or 8?  But soon I told myself that I don't need all 20 (and it's next to impossible to expect I would land all 20) and that a slow and steady approach will keep things enjoyable and financially maintainable.

I've already landed a couple of these new cards and should have some nice mailposts coming over the next few weeks.

Speaking of mailposts, I received a great package from Paul over at Card Boarded last week.  Totally unexpected.  Inside was a great surprise.  In addition to a handful of Linden base and parallels (sadly I have them all....but they are still very much appreciated and will be placed into my collection) there are a few Raise The Cup cards.  These are always exciting cards to chase down. 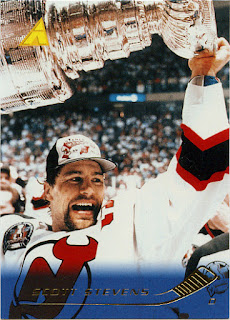 A nice closeup shot of Scott.  It's odd seeing such an intense player actually show a little joy.  I'd love to see a little more of the Cup, but I can see how one would hesitate thinking it would take away from the expression. 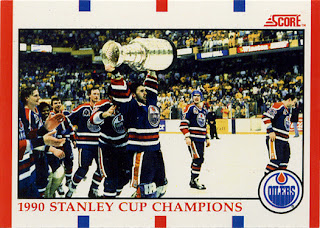 Here's a first - a team shot.  Goaltender (and Conn Smythe winner) Bill Ranford is clearly the focus as he leads the parade around the rink.  Sadly, Messier had to get in the way and ruin a perfectly good photo. 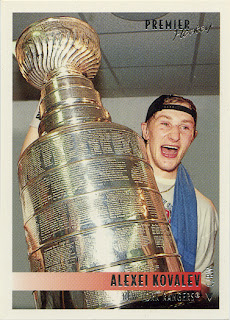 We need a ruling on the field here.  Technically, I stated the the Cup must be raised 'over the head'.  I've bypassed a couple cards in the past because of this.  But at the same time, I've included this Kirk Muller card into the RTC family while disallowing this card.

I've come to this conclusion... 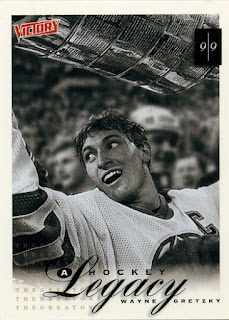 Wayne raising the Cup is just cool.  No more needs to be said here. 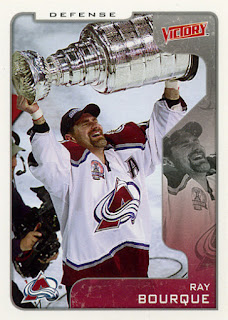 Talk about cool!  This card might just go down as my new fave.

I vividly remember watching this game.  Seeing Colorado on a mad mission to get Ray his Stanley Cup.  To see him sitting on the bench as the clock winds down - over-emotional.  And who can forget the moment Captain Joe Sakic showed true class by passing the trophy over to Ray so he could be the first on the team to hoist it.

For it to be captured on cardboard like this (a great photo) and on a low-end product like Victory just reinforces that there are an endless amount of cards and projects to build in this great world of collecting.

Thanks so much Paul for the great adds.  I really appreciate it.

Current Collection - 96 cards
Posted by bamlinden at 1:04 AM