ONE OF THE GOOD GUYS - Calgary Hitmen 'Teddy Bear Toss'

I've been waiting for this past weekend's local junior hockey game so that I could post about a fantastic annual event that takes place here in town.

For 18 years, the WHL's Calgary Hitmen have been making a huge impact  with just the simple scoring of a single goal.  Of course the goal needs to come in the right place and at the right time. 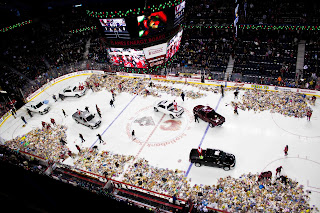 This year, it was December 2......the annual Teddy Bear Toss.

For those of you not familiar with the concept, it's pretty simple.

Everybody coming to the game brings a stuffed animal.  When the home team scores their first goal - start chuckin'!


Pavlo Padakin was the lucky player to score the Teddy Bear goal this year.  A definite career highlight for him.

Every player in that dressing room wants to be the one to score that special goal and the effort on the ice each and every year just elevates on this night. 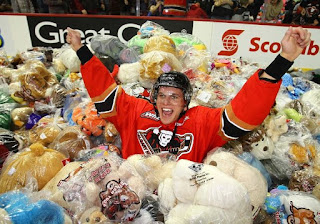 As much fun as it is to see on TV, it's even more of a blast in person (especially if you are down close to the glass).  Bears flying everywhere!  I took my niece and nephew to it a few years back and the whole game was just about the one moment.  A definite memory.

Now on to what these bears are all about.

The stuffed animals are gathered up and delivered by the Hitmen to local charities including the Alberta Children's Hospital.  A real cool gesture by the team without question.

Here's a look at the delivery of the bears.  Nice job guys.

I think it's also a good opportunity for some of these young men to see how important being a role model is and rewarding giving back to your community can be.

In addition to the flying fuzzies, you may have noticed some unique jerseys worn by the players. 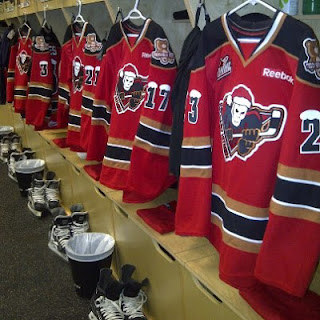 These special Christmas-style jerseys have a Santa hat perched on the front player logo as well as snow tufts on the numbers both on the sleeves as well as the back.

These jerseys will be auctioned off and the proceeds going to charity as well.  If for some reason you are interested in bidding, you can go to the Hitmen website and bid.

The Teddy Bear Toss - One Of The Good Guys!
Posted by bamlinden at 12:23 AM

Labels: One Of The Good Guys