Panini's latest hockey card offering hit the market on Wednesday and I'll admit it has me excited.

It's called Panini Classics and (with the current lockout) seems an appropriate product as it celebrates past players in the league.

It's a very diverse checklist and my guy is included.  The best part is that it appears he only has FOUR cards that I will need to pursue.

And that suits me absolutely perfectly.

Two of those cards are unnumbered, non-memorabilia, non-signature cards.  That equals cheap.

He also has two autographs - both not serial numbered - which should lead to some very manageable prices.

I've seen all four cards hit ebay already, but I'm in no rush to chase them down.  There's a local card show this weekend and a trade night on Thursday.  Maybe luck will be on my side and I can actually trade for a couple of these pieces of cardboard.

One of the cards though, prompted me to post about the use of fonts.  Font styles, font sizes, .....fonts. 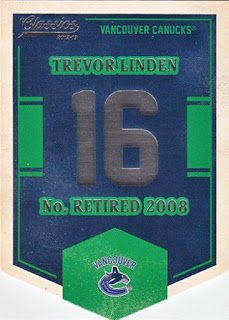 Here's the culprit.  A nice card upon first glance.  Please note that the number and product logo appears to be foil-type silver and surely don't scan well.

But it's not the foil I'm disappointed with.  It's the fonts.

The number 16 is a generic number font that all the cards in the insert set use.  It has zero connection to the number styles used on Canucks jerseys throughout Linden's career.

Add to that the seemingly 'beginner-esque' glow/border around the player name and the retirement year.  This looks very simple and unimpressive.

I would have thought (and hoped) that the card would implement the fonts that reflect the actual banner that has been raised to celebrate said player's honour.  Apparently not.

So I took the ball and ran with it.  I designed my own card.  I used the number style similar to the one used on the actual banner and I used the Canucks font that Linden wore on his back during his last game in the NHL. 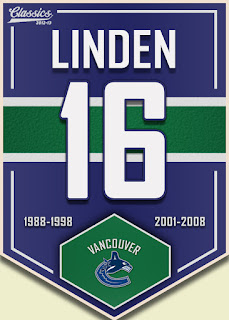 While it's not exactly perfect, it's a huge improvement on what's actually out there.

The idea that each one of these cards could have had a very personal connection to the player, just by the use of fonts, was completely missed by Panini and the end result is a 'ho-hum' insert set.  Think of the great Boston cards, Montreal, even a team like Los Angeles.  All unique to the player and the jersey.  But no.

And imagine the rare, parallels you could create.  Imagine this Linden with the retro black, orange and yellow - complete with the proper font and number style.

And don't get me started on colors.  Where's the white Panini?!!  Last time I checked Vancouver has white in their jersey.

Fonts!  They are not to be taken lightly.
Posted by bamlinden at 10:58 AM