Three more bubble mailers hit my doorstep this week.  And they had some very nice additions to the Linden collection inside.

But first, I must comment on a letter that was also in my mailbox with those cards.

I knew it was coming, but I still am holding out hope that it's all a bad dream.

The condo complex where I live (and the surrounding area) will be converted this year to community mailboxes instead of door-to-door delivery.  And while I'm all for streamlining the process (with less and less mail being delivered) I can't help but think this will have an impact on my collecting.

Bubble mailers are like candy to some.  Eye catching, enticing and can make you react in a not-so-natural manner.  I've been pretty lucky over the years to be batting a pretty high average with mailers coming in, but I can't help but wonder if that number will slip when things get a little more close knit.

Bigger envelopes will be tucked into a larger storage area where only I will have access to.  Anything that can go in my (smaller) mailbox will be placed there.  My concern is that the letter carrier has to observe and adhere to these rules...something that I don't trust all of them to do.

I hope that my incoming mail experience doesn't take a big hit later this year.  It's coming......whether I like it or not.

But before then, let's take a look at what I received this week. 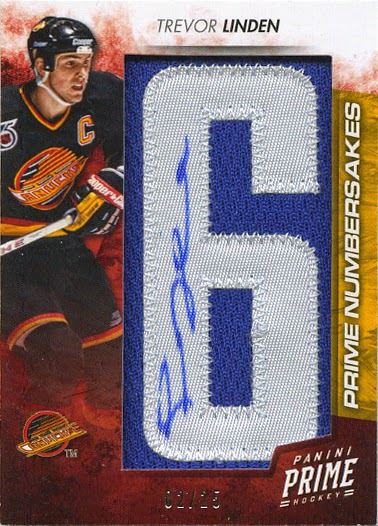 This signed number 6 (not game used) completes the giant two-card Panini Prime chase from last year.  Can you guess what the other card was?

While I'm not the biggest fan of manufactured patches, I don't mind this concept.  I like it more than the non-game-used-nameplates which have been a staple in hockey products for years.

Actually, if there's anything that really grinds my gears it's the blue & white number slapped in a yellow, orange and black card design.  Swing and a miss. 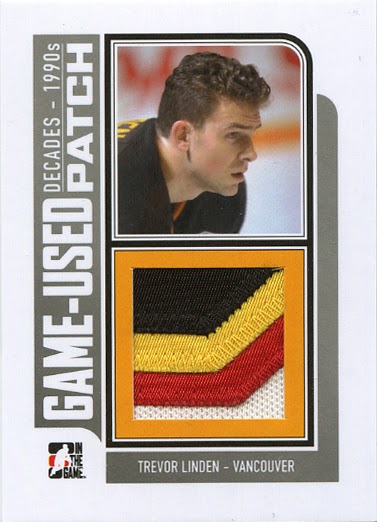 This card finishes the trifecta of patch cards from the Decades 90s product.  And with the Gold 1/1 in my possession, I can say that I'll be the only one who can accomplish that feat.

I picked this card up from a seller on ebay who has listed a number of great Linden cards recently.  And he puts fair prices on his cards (thank you).  He also likes to list goalie mask cards at a buck, so I try and snag a few that I need and bundle it all up. 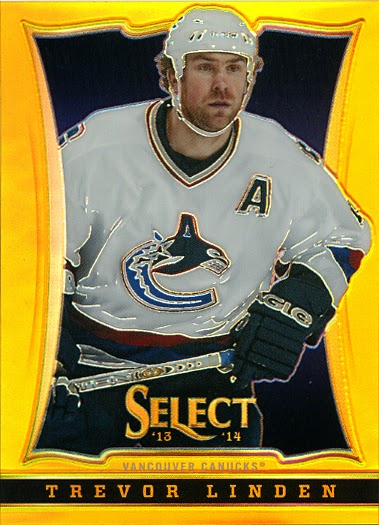 Last, but certainly not least, this gold parallel was another pleasant surprise to see up for bids on ebay over the past month.  This product had a good initial run but you rarely see singles on the secondary market anymore.  I don't know if prices are coming down and more of this stuff is being opened?  But I really don't care, the tough /10 is off the list.

And the scan (once again) does not do the card justice.  It's a nice shiny model no question.

Three off the list with the biggest print run being 25.  That's a big accomplishment.  Not sure how many times that'll happen again.
Posted by bamlinden at 1:45 AM