There have been just a handful of really....REALLY exciting moments for me in this hobby I love over the past couple of years.  But in that time I have picked up some nice cards, new project starters, tough finds and rare parallels.

But none of those compare to the two words....

It's a card that makes you double take triple take when it finally rears its ugly head, produce an unconscious smile that just can't be wiped from your face and prompt you to go immediately into "card acquisition mode".

All this buildup.....you can guess that I had such a card arrive in the mailbox recently.  So let's take a look at it and I will break it down for you. 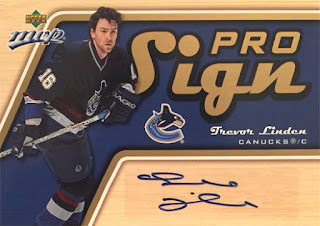 While this card might just look like a simple signature offering, I can assure you that there is more to this than meets the eye.

This card has been the top want on my list for a number of years now.  On hobby chat boards, when the topic of "What is your white whale?" comes up.....I post a photo of this card.  It's not serial numbered, it's not uber-rare, heck....it's a sticker autograph.  It's a 10-year-old piece of cardboard and I haven't seen a single copy of it for over 8 years.

Well, it comes from the 2005/06 MVP product which, unlike pretty much every other year of MVP, has a bit of desirability.  It is after all the Sidney Crosby/Alex Ovechkin rookie year.  So while a good wave of this stuff was opened when the product was originally released (to get the highly desirable rc's), the product dried up because everyone got their copy.  Tons of this product just sat on the shelves.  Why?  It wouldn't go on sale for rock bottom prices.  Why?  It had the Crosby and Ovechkin rookie cards.

A circle that left a lot of cards like this Linden Prosign sitting in boxes likely never to be opened.

When the product first came out there was a good buzz following the Linden auto.  Like many Linden cards at that time, many of us wanted to pick it up for our collections.  The prices on the first few were high (as they normally are....anxious buyers).  I decided to wait it out and let the prices come down.

Well, the prices never came down because copies of the card never showed up.

After a few years I realized that I may have missed the bus on this one.  In fact, it got to the point where I truly felt I'd never obtain a copy of this card - ever.  I even considered contacting a fellow Linden collector to see if he'd be interested in selling me his copy.  It never came to that, but I thought about it real hard.

When this copy hit the open market I knew I'd have to bid big on it.

A few e-mails to fellow Linden collectors to gauge the interest level (and seeing the initial bids on it) gave me the indication that this would be a hot ticket.  I came up with my "maximum number" and waited for the auction to near its end.

A full day before the timer was to end a bid came across that was a whopper - bigger than the number I had as my maximum.  I was not only surprised that someone would play his hand so early, but worried that this card might not be destined for my collection.

The nice thing was that I had a full day to contemplate.  I decided to up my maximum bid and crossed my fingers.  As the auction neared its end I pulled the trigger.  Sure enough it was just a little higher than the big bid from the day earlier - enough to make me the winning bidder.

I haven't been so happy to win a card in a really long time.

It arrived today and I am absolutely pumped.  I must have stared at it for a good number of minutes.

And while I paid overpaid quite a bit for it, I have absolutely zero buyer's remorse.  It's one I am more than happy to cross off the list and put this chapter of my Linden collection to rest.