Digital cards.  It's a subject that I really haven't had impact my collecting directly - yet.  My guy hasn't been added into any digital card products - yet.  I haven't really had to decide if I'd put money into cards I can't touch - yet.

But the concept of digital cards has been one I've thought about many times...and for many years.  And so I thought I'd share my opinion(s) on the topic since my scanner purchase hasn't happened quite yet.

What are digital cards?  To me, I've only experienced them as an outsider looking in.  I would consider what Topps has done with their Star Wars, what Upper Deck has done with Upper Deck (and others) to be true digital trading cards.  That is - opening "packs" online or through apps or other means to then reveal cards which are yours in the sense that they are housed under your name....but they aren't truly tangible in that you can't hold onto them physically.

I think the streamline process of concept to completion of a set, the ability to get them out to the public and in turn be traded through the digital world is so fast and exciting...I can see it being a part of collecting for the foreseeable future.

People live in a world where things happen quickly, reactions happen almost instantly and yesterday's news is just that.  The ability to access "now" quicker can most definitely be a good thing.

That said, and I think I feel this way because I haven't yet been faced with dealing in the digital card world directly - yet, the elimination of the brick & mortar store - the local card shop in this process is definitely concerning.  I worry that the more digital cards become popular, the fewer shops in town and shows locally there will be.  If there was one single thing about digital cards that I don't like....it would be this.

I don't know if I want my hobby to be completely done from the chair in front of my computer (it takes up a lot of time there as it is).

There are some fuzzy areas for me as well when it comes to digital cards (and maybe you out there could help in clarifying).

I've heard that with some product releases (Upper Deck Series I hockey), cards that would have been released into the set (parallels, subsets, etc.) were not printed in full numbers to be put into physical packs.  For example, UD Exclusives /100....there would not be 100 of each card that could be obtained in physical packs.  Some of these numbers were reserved for the digital version of the release.  Truly creating a hybrid effect with the production numbers.

Also, with digital cards there are the opportunities to obtain physical versions of certain cards - or even special variations only obtainable through the digital collecting process.  For example, if you get a certain number of digital cards of a certain player, you can trade them in to get a special card mailed out to you.

Another interesting twist to the concept.  Still on the fence with this one.  I feel as though this is creating a new landscape of how to collect.

What if Linden gets a card?  Do I add it to the list?  How would I feel once I obtain the digital card?  Where do I keep the card?  Where do these additions land on my overall wantlist?  After all....I am a completist.

Do I equate it with music?  I buy off of iTunes but never really have a physical copy of the song.  Am I ok with this?  (Actually....I still buy most of my music through cd or vinyl.  I'm definitely old school like that).

Lots of questions, lots to iron out.  I'm sure things will be less volatile over the next year or two once companies find something that works in terms of a template.  I don't think digital cards are going away anytime soon.


One concept that has me intrigued is Topps Now.  A baseball digital release that coincides with the games being played on any given night - and new cards being mocked up the day after.  Instant satisfaction.....right? 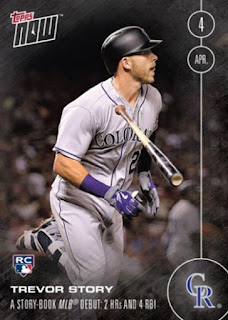 This Trevor Story card was made and shown off literally hours after his debut.  That's pretty exciting.  And it's been 2-4 different cards on a daily basis being shown off - all documenting the baseball season and the exciting moments it has.  Slowly building a robust set as the season goes along.

I feel like I've seen this concept somewhere before... 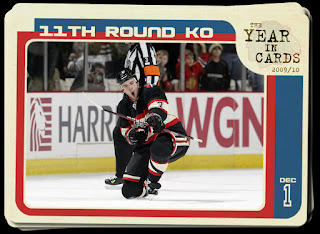 For those who have followed my blog since the beginning, you may remember this daunting experiment I started....and then abandoned after a couple months.

I would grab a photo from last night's action, make a card and then at the end of the week I would share them all on my blog.  A recap of the week's action. 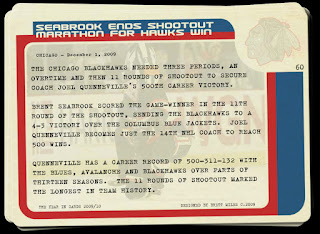 And yes, I did make card backs too.

At the end of the day it was just too much work to keep up with creating cards and writing up the backs.  But I did like the concept.

What Topps Now has done, in addition to building the excitement of what is created on a nightly basis, has kept collectors interested and engaged in the next cards to come out.  Even going so far as participating through social media in hopes of swaying the next day's decisions.

It's a very immediate, inclusive and interactive product that is being built.

Now, my understanding is that if you want a physical copy of the card, you can order one through Topps.  Once the deadline to purchase any single card has passed, they will print only that number of cards and then ship them out.  Truly the essence of "demand and supply".  No waste and no leftovers.

I don't know if the cards are numbered or if the production numbers for each card is announced.  I'm on the fence as well with the price point for the card.  I believe it is $10 per card.  Again, it's such a new venture that I'm in more of a spectator role....so from a price point I can't really say if that's good or bad.

I don't even collect baseball cards and I find myself looking at what the newest Topps Now releases are.  I think that can only be a good thing moving forward...interest in a concept can be huge.  Keeping collectors engaged.


Lastly, a question was posed on an online chat board asking what can the hobby do to attract the younger collector....the next generation of hobbyists.  While many feel that, like stamp collecting, sportscard collecting will fade with the current crop of collectors....eventually dropping off completely a few decades down the road, there are some that feel there can be a bit of a resurgence.

I am one of them.

And I believe the concept of digital trading cards will be a part of it.

I think that if a company can come up with a concept where trading cards are merged with the world of digital communication and social media, creating an EXPERIENCE for the collector that will engage them...then there might be something there.

I look back to when I was a kid.  7, 8, 9 years of age.  Just getting into hockey cards.  What made them special to me?  Well, I could trade with my friends - it was a social experience.  Participating in it was fun.  Watching others rip open packs was fun.  Adding to my collection was fun.  Finishing a set was fun.

But there was something else that made cards special at that time.  I felt as though I was getting a little closer to the players.  I felt like I got to know them a little more.  Remember, this was at a time before computers, before the internet and before social media.  Getting information on your favourite player meant watching Saturday night hockey on TV or reading the newspaper or hockey magazine.  There was a barrier between player and collector.  Getting closer to the player was exciting.

Today, there is almost complete transparency when it comes to player and fan.  We have cameras on them at all times it seems, they are able to communicate with their fans at a moment's notice on Twitter or Facebook and we see them and hear from them on a daily basis - even during the offseason. Hockey is everywhere (I'll use hockey for this example).

The media coverage has created a world where there is no separation.  Nothing feels special anymore, certainly not a new piece of cardboard that has to be bought at a card store.

But what if a company could take the concept of cards - trading cards and turn it into an experience that a kid could get nowhere else?  I don't know what that would be?  But I feel that the digital forum of both cards and communication will be key in getting kids - and keeping them engaged in hockey and hockey cards will be paramount.

The essence and simplicity of physical cardboard cards in a store might go by the way of the dinosaur, but digital cards might just become the portal for future hobbyists.

In the end, I do feel like there will be a lasting place for digital cards....and I lean towards the "I like them" side of the fence right now.


So what are your thoughts on digital trading cards?  Have you tried them?  Will you?
Posted by bamlinden at 1:03 AM