Part of the card scanning I did recently included a tremendous gift I received from a fellow hobbyist and Jacques Plante collector.  And while I don't normally gush publicly about presents like these, I do have an ulterior motive.

For those who may not know the backstory, I was volunteering for a charity bookstall a couple months back.  Out of sheer luck/coincidence/karma I came across an amazing find.  A signed Jacques Plante book is incredibly rare and to see the charity benefit from it to the tune of $200 was equally amazing.

I was the go-between for the transaction and I received the following cards as a "Thank You" for my efforts.  I must say, I was speechless when I saw the lot. 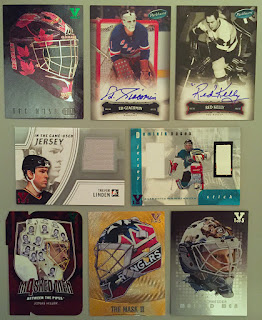 Now I'm not a Vault fan but even I had to marvel in the selection of these cards.  I really appreciated that the sender took the time to find out what I collect and customized an amazing package.

I may use amazing a couple more times.

The Linden becomes my third Vault card in my collection - and I have zero interest in the product.  That's a pretty good batting average.

But let's take a closer look at some of the items. 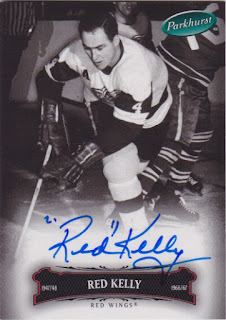 This 2006/07 Parkhurst product goes down as one of my all-time favourite products.  I think the execution of design, photo selection and checklist is a real triple threat (and a call to card companies out there on how to do it right).  The hard signed signature inserts make the chase even more impressive.  And while there are some tough short prints out there (Lemieux, Beliveau, etc.) there are many great autos that are very reasonable in price.

The Giacomin is already sitting on my shelf at work as part of my shrine.  A constant reminder to me that if you do good things...good things happen.  This Red Kelly offering will sit in the collection for a while. 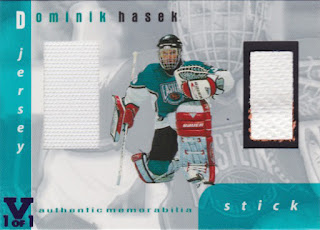 The Dominator - All-Star version.  I like goalie stuff and this card packs a good punch.  The stick piece on the right bulges out quite a bit from the card and the photo in the middle harkens back to a fun time both in my collecting world and the hockey one.

This will be one of a few cards that hits the trade box (or maybe used in a different way...more on that later). 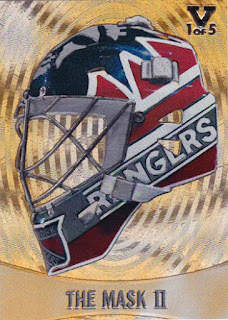 Mask cards are a big fave of mine.  I've enjoyed building (slowly) many of the base versions of these sets and have even made some good headway recently.  This Richter card is the gold version (originally limited to 10) but with the Vault designation I guess that turns into 5....or 15???  Who's keeping track?  Definitely not me.

Richter's mask (as cool as it is) always reminds me of the Canucks and their failed run at a Stanley Cup. 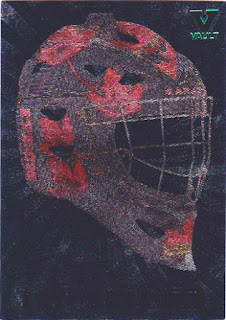 Probably the most enjoyable card in the lot is this Carey Price Team Canada mask card from The Mask IV.  While that in itself would make for a great card, it's the fact that this is the unreleased black version that has me wide-eyed.

The card scans like crap but it is a deep black shiny piece of goodness with a green Vault stamp (not sure what that means...if anything).  Any Carey Price fan, mask fan or unreleased card fan I'm sure would be thrilled to add this to their collection.

Huge thanks to Pete for the generous gift.  Way more than I ever would have anticipated.  A win-win for us both I guess.

But now I want to focus on that third "win" in the title.  I need to find a way to turn a few of these cards into some $$$ for another charity that I'm fond of.  I'd love to set up a raffle or action (or three) to capitalize on these cards so I can then parlay the funds towards another charity.  But what's the best way to do this??

Canada Post is likely to halt mailing after this weekend while they pitter-patter around another dispute and I'm not a big eBay fan.  I'd set something up on my blog but I don't know if I'd get enough eyes on it.  Maybe something locally like trade night or a card show?  Gotta come up with a plan though.  Keep the momentum going.

Anyways, long story short, I'm open to suggestions (I'd love to raise $100cdn somehow utilizing these cards) on what might be the most successful (and safest...for all) method.