I can finally say I own a copy of this card.

It's one that has "eluded" me for a number of years, but I feel more like I missed the boat initially and then stepped back from it for a long while only to drift back towards it recently.

There are some cards on my wantlist that have a story even before I am able to cross it off my list.  There aren't many, but the ones that do give me an extra special feeling of accomplishment (or relief) when I do finally pick it up. 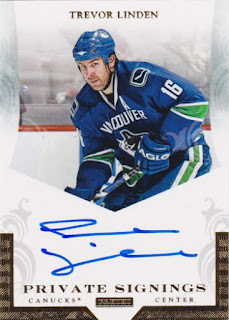 Phew.  For those that know this set and know this card...it's a huge exhale to finally own it.

The Private Signings insert set was one of the nicest autograph sets I think Panini ever put out.  It's hard signed and with a deep checklist.  Why?  Well it was a multi-product release.  A portion of the checklist would be inserted into different Panini products creating the potential for a never ending build.

This Linden was inserted into the high-end Dominion release and is a good looking card.  The auto on this one is strong (no weak sharpie stuff).  He also has a Montreal Canadiens version which I picked up years ago at the Toronto Expo.

When this Canucks version first hit the open market, I decided that the price was too high for my liking.  I can't remember how much it was going for at the time...but I can assure you it was less than what I paid for my copy.  I just honestly thought that the price would gradually come down and I would snag one at a later date.

Little did I know that this set would become a popular one for set builders and Canucks collectors in addition to Linden guys.  When the well dried up....it dried up well.

To add to the struggle, this card is not just a shortprint.....it's an SSP.  What's the difference?  I don't really know....but I assure you it did not bode well for me.  So I waited.

A few copies would pop up on eBay each year but with huge asking prices.  Immediate turnoff.  I inquired about a copy here and there on hobby boards but again the asking price was too much.

So I just left it.  I knew eventually one would hit the market at a price and time that would work for me.  That just happened to be a few weeks ago.

Yes, the price was a little itty bitty bit higher than I wanted to spend, but it wasn't enough to say no to. When I cracked open the bubble mailer today and saw it....I knew it was worth it.  I'm thrilled to cross this one off the list.

And now that I've typed this....I'm thinking "I've said that on more than one occasion this year".  I guess that does make for a good 2016.  Maybe a year-end post is something I'll have to draft up.