After letting my Raise The Cup project grow a little disorganized, I decided to spend part of a recent day off sifting through various piles, scrounging through a couple binders and finally getting this project in order.

And it's such a small load off my back.  Ha.

Seriously though, it's nice to have a little more focus on this project as it is one of my faves.

I've also decided that I'm going to officially chase some of the "Cup raising" subsets out there...so I might as well make a list or two.

I've mentioned in the past that card companies have done a nice job in borrowing my idea to create some stunning Cup raising cards.  I think the best of the lot are the Upper Deck Premier Signature Champions.  So much so that I've basically designated them in their own way - apart from this Raise The Cup project.  They're kind of like a couple brothers.

But there are some other great sets that I've now properly documented and organized.  They are now officially on the "to collect" list.  They are (in no particular order)...

I also have a couple subsets that I've completed through this venture and so I won't include them (since I already have them).

Some of these sets I've got a good dent into while others are going to be new quests.  It's exciting that I now have some defined goals with this pc as it was pretty much "oh look.....I'll add this one to the binder".  That limited me to sifting through boxes with no rhyme or reason to it.  Now, if I find a box of sorted base or inserts (ok....I can laugh about that) I can pull out the list and cross the fingers.  As well, if I come across some near-completed sets, I can chase only those that I need - what a concept.

I also did a little re-shuffling of my non-set Cup raising cards and got the binder nicely organized.  It was a fun couple hours and it really is something I should do more often.

So with this new found level of awesomeness that is my Raise The Cup project, I'll show off my newest acquisition. 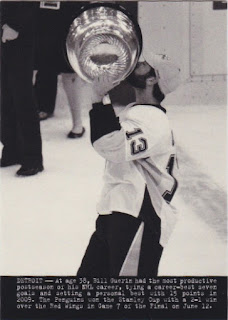 This 2014/15 UD Masterpieces Wire Photo card has a nice photo of Bill Guerin kissing the Cup, but I really think it would have been a better card if it were in color.  The whole "wire photo" thing is a little old now.

When Parkhurst had them included in their 2011/12 product, they were really well done.  Exciting, great photos and a unique addition.  Nowadays, there have been a couple different products trying to emulate that feel (including this card above) and they just miss the mark for me.  They feel more like just a photo that has been desaturated and slapped on a card.  The white text on black also really disrupts what a wire photo is to me.

I think a wire photo is a certain style of photo, not an overhead shot, not a dynamic shot....it's hard for me to explain.  All I know is that a photo like the Guerin above just doesn't have the feel of what a wire photo is.

Add to that the lack of a border.....and it just isn't even close to hitting the barn.

But I didn't grab this card for the wire photo likeness, all I'm interested in is the Stanley Cup.  So for that...it'll do just fine.

I'm looking forward to going into a new year with a plan for this project.  You can even ask me what I need now....I can tell you.  :)