LINDEN CARD OF THE WEEK - A Surprise Special Guest

A few weeks ago, I was digging through my base cards and non-PC cardboard trying to hunt down as many cards featuring Indigenous players for my buddy Naim's 'Base Cards For Kids' project. He sent a shoutout on his YouTube page asking for (you guessed it) base cards of Indigenous NHLers so he can pack them up and give them away to kids.

I loved the idea and immediately hit up his website to remind myself of the dozens of players who are on the list. I managed to find some and mailed them off. It felt good.

And I think the hobby gods agreed...because in my search, I discovered a number of new Linden cards to add to my master checklist.

Way back in the day (I'm talking 25+ years ago), when I was originally developing my Linden master checklist, I found a few cards that featured other players...but just happened to have Linden in the photo - a cameo of sorts. Me being me, a completist, I made the decision that these cameo cards needed to be added to the list.

Most of them are junk wax base cards - so the price to pick them up has been cheap, but a few of the parallels might have me cringing (a 1/1 Eric Desjardins is on the list). Really, it's just a fun addition to an already hefty checklist.

I've even had a fellow Linden collector send some knowledge and generosity my way. This hobby is the best.

So where am I going with all of this?

In my digging for base cards, I found a Kirk McLean that had me stop in my tracks... 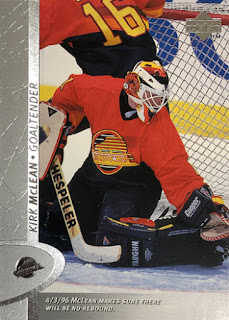 I couldn't believe that in 25 years, I have never noticed Linden's number 16 staring back at me.

I love my goalie cards - and have a decent amount of junk wax-era goalies due to the cool masks they wore in those days. I really liked the sideplates on this McLean mask and so I kept the card.

Again...how did I not see Linden all these years??

Regardless, it was an easy add to the Linden checklist - and an equally quick cross-off.

My memory from 25 years ago isn't as strong as it used to be...so I didn't know if there were any parallels for this card (which would of course need to be included on the list). So I made my way to COMC to check if there were any offerings.

In my search there, I came across ANOTHER McLean card that clearly shows Linden in the shot. I was stunned. And then I laughed.

First of all, what a terrible photo to use of Kirk - the dude just got scored on! What gives? Second, there is the base card and four parallels. Sure, they're not bank-breaking parallels, but still. Five new cards to the master list. Crazy.

It makes me want to go through all the Canucks who played with Linden and check out their cards. I wouldn't be the least bit surprised if there are a couple more photos that sneak Linden in the background.

This hobby is always providing me some fun and interesting curveballs. I love it.

And for those who have some extra base cards lying around...please consider Naim's 'Base Cards For Kids' project. Head over to his YouTube page to learn more.  Thanks!