Raise your hand if you are glad to see the calendar turn over to 2022?

It's been a challenging year on many fronts, but I am grateful to have what I have, know who I know and have the chance to step away from work (among other things) during this holiday season. These past couple weeks have been ones I've patiently waited for and am doing my best to make the most of it.

Speaking of patiently waiting....I finally received my COMC order that I was hoping to see about a month ago. Better late than never I guess.

So...it's a 'show & tell' post showcasing some of the Linden cards that have crept into the collection over the past few months. 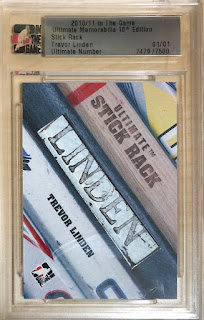 I'm just gonna start with the number one pickup of the year...I couldn't believe it when I saw it surface on COMC. A little higher priced than I wanted to pay...but I finally caved when I thought about just how few cards I've bought this year. I knew I'd regret it if I let it slip by.

I've had this card on my master checklist since its release in 2010...but I questioned its existence as it was the only card of Linden's not to surface in all these years. Sure, it's a one-of-a-kind card...but this was a fairly limited product release...and a lot of it was cracked open. All of the other Linden 1/1s in UM10 were spoken for (I've got two of them myself...including what I consider to be the pinnacle piece in my Linden collection) so to add this one was huge.

I've looked at the card a number of times this afternoon...it's fun to find a piece of cardboard that really gets the excitement going.

I love the simple (almost obvious) design and ITG had always done a bang-up job of incorporating the memorabilia piece (or sticker auto) into the design of the card - it just made sense.

This is my second nameplate (I also own a Cup 'Property Of' card) and I'm on cloud nine to have this one in the collection. 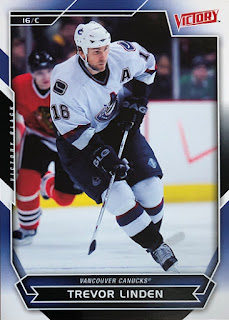 Another card on the list for far too many years...never seen a copy of it surface until recently (now this year wasn't serial numbered...so I don't know how many copies exist). But when a fellow Linden collector reached out to me to let me know one was up for grabs on a selling site, I grabbed it without much thought. I figured I had landed a fantastic deal.

I was shocked to find out over the next few weeks that a number of these Victory Black cards have magically appeared. Certainly odd. To not see one for well over a decade...then see 5 or 6 in a matter of weeks.

Sadly, the price I paid for mine was more than all of the other copies...but I can't be too down on it. You just make the best decisions with the information you have at the time. I thought I was in the company of a rare bird, but discovered a flock.

I do know that there are more than 5 copies of this card (which is what other year's Victory Blacks are numbered to). 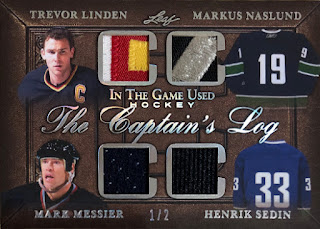 Oh man....let's get this one over quick.

It's a slick looking Linden patch. It's numbered to just 2 copies. It was a really good price. I bought it.

Yes, it has Messier. Yes, it's from a release that has 11 parallels all numbered to 12 or less. But I'm a completist...so into the collection it goes.  :) 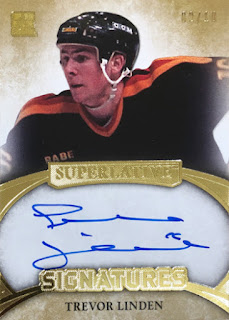 This one surprised me a bit. I had always thought I owned a copy of it...but am glad I checked when it hit eBay a number of weeks back. I probably checked a half-dozen times to be sure...and then placed my bid. Right place, right time...and it was mine.

Love the hard-signed aspect, low numbered (for a product with just a couple parallels, it was nice. Another one that was nice to capture this past year. 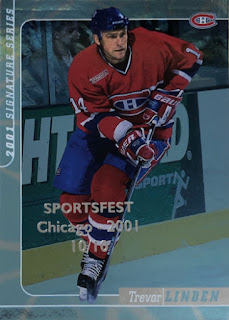 Out of all the cards I landed, this one might have put the biggest smile on my face. Yes, it's a simple show card...but it finished off an ultimate rainbow - 18 cards...14 of them show cards. I'm actually in awe that they're all accounted for in my collection.

For some reason, the past year has seen a huge resurgence of early 2000s show cards...and I've been able to land a number of them for my PC. Of course, I'm doing it with an eye on the price tags, and have been able to pick many of them up for prices I'd have jumped on 15+ years ago...let alone today.

These are still tough to come by in my opinion...I'm chalking it up to being patient and keeping my eyes open. 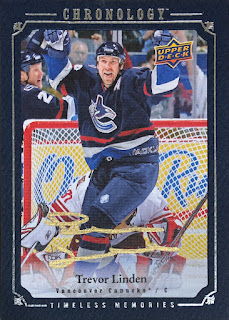 Gold pen autos are really nice. I'll just put that out there. These Chronology signed cards are fantastic. I scooped up the red version early on and was waiting for the blue copy to hit a price I was happy with.

This one comes via COMC...but because I had been building up my inventory before having it shipped, I forgot I bought it. I saw a copy at a card show in Burnaby when I was there at the end of October and snagged it.  Oops.

Oh well, I've got some Linden tradebait (which is never a bad thing).

And again, it's a great looking card. Hard signed and with that canvas-type card feel. Gorgeous. 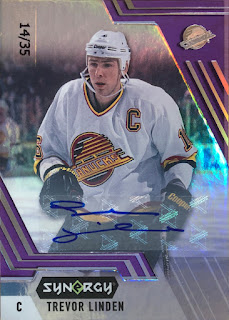 I didn't go to many card shows this past year. In fact, I can count on one hand how many shows I hit up. But the biggest one of the season for me landed this great Linden copy.

I was excited to see the checklist for Linden cards in this product. A number of sutos, some parallels, tough chases and simple finds. While I haven't been as aggressive with the pickups, I think it's a great mix of cards to chase for the PC.

I probably paid a little more than if I had picked up the card online, but there are times when finding the card in person, holding it before handing over the money, makes it worth it. Really happy to add this one. 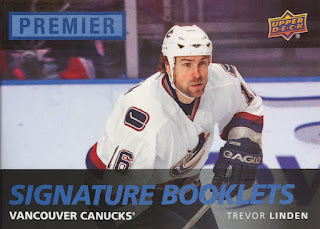 Last card to show off here in this post...and it's a first.

I've had my eye on this card since it first was released and I'm happy to now say I own a copy. To some, it might seem like "what's the big deal?" but to me, unique items on the collection are always very welcome.

Once again, absolutely love the gold pen auto. Crisp signature and hard-signed to boot. It's a simple card, not serial numbered or anything, but I love the looks of it.

This card reinforces to me just how much I love honing in on what it is I want to collect...and then pacing myself to chase and purchase the cards I want to add to my collection. I'm very fortunate that I've found that in this hobby.

I hope everyone finds that in this great hobby.

Stay tuned...I actually got cards for some of my other PC projects as well and will share those in some upcoming posts.

Posted by bamlinden at 9:51 PM