My Parkie Project has been slow...as expected. But I feel as though the past couple of years might have slowed me down too much.

Card prices have gone up...especially the vintage variety, and I was always hoping to build this collection on a budget.

Still, for an iconic set, there really is no downside to what these cards can bring.

The last time I added to my PC, it was a trip to BC late last year. I decided that the opportunity was there to snag a couple items and even though the price was a little higher than I had hoped, it was a good time to buy.

Same holds true for my most recent purchase. 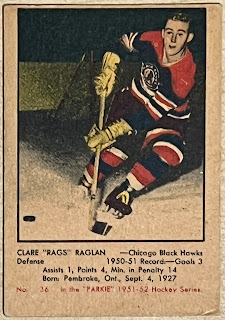 Once again, this is his rookie card (most of the cards from this set are) and has a nice action shot of Raglan in his Chicago uni.  Take a moment to enjoy those gloves...skates...straight stick...empty boards...sweater.

Clare Raglan played just 100 games in the National Hockey League over 3 seasons (two with Chicago and one with Detroit). He was a depth defenceman and earned the nickname "Rags" when he found himself monitoring the same blueline as another teammate named Clarence. I guess it was a more common name back then. He also is the father of NHLer Herb Raglan (who played in the late-80s/early-90s).

The first thing you might notice (I know I did) was the off-centering that this card has. This set build isn't a high-ender...but I want aesthetically pleasing cards. Rounded corners...no problem. Clean backs are a must (no rips, tears or pen marks). Creases at a minimum (would prefer none). And a nicely centred card.

So why did I snag this one?

I don't see these cards at shows or stores as often as I used to. The store I bought this from is one that I trust and want to support.

But honestly...I just wanted to buy a card.  Ha ha.

Maybe if I had purchased a few cards recently, or picked up a couple other Parkies in the past few months, I would have passed. But the excitement and enthusiasm for adding to the PC was strong.

So do I regret the pickup?

No...not a chance. These are hard cards to find and at the rate I'm going, I may never finish this set. To put me one closer to completion is always a good thing. Would I have liked to have picked up the card for slightly less (this is one of the top 3 most expensive cards in my Parkie collection to date)? Absolutely...who wouldn't. But again, to support my LCS made it worth it. If this card was on a table at a show...I'd have likely passed on it.

This card now proudly sits in my collection...and has story. Nothing wrong with that.