LINDEN CARD OF THE WEEK - Sigh.... I Had To Add A Messier

Oh boy...I can't believe I did it. But it was for the greater good of the Linden collection.

There are a few, fleeting moments in the career of Trevor Linden where his world collided with that of one Mark Messier.

Now, I'm not going to go on a long diatribe about how much I detest "The Moose", but let's just say that I think he is absolutely the most overrated player the league has ever seen. He does NOT epitomize leadership nor does he exude a winning mindset.

Yes, he has trophies...but he is no champion.

ANYWAYS...a card popped up on eBay a few weeks back that had me cringe as I bid on it. It showcases the epic Stanley Cup Finals between the Canucks and Rangers from the 93/94 season. It still goes down as one of the best finals I have ever seen.

So, me being a completist, I bid on said card...and won. 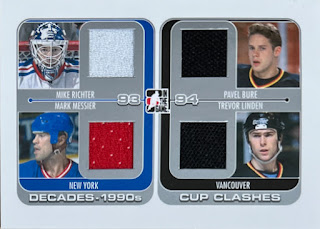 With only 30 copies of this silver parallel printed, it's a card that has eluded me for a decade. Or maybe I was just avoiding it. Regardless, when I saw it surface, I thought that if I could land it cheap...I'd allow it into my collection.

They even had to use a smug photo of Messier...didn't they?

It's a great card to add to the PC and it's one less of "that guy" I've got to keep track of.

OK....enough of that. I've given him enough of the limelight.  Ha ha.