Sweet Goalie Sigs...yes, this is a project I have in my collecting world. You might not have heard of it because I've only posted about it once - to show the only two cards in my small PC.
But after 8+ years...I have finally added another piece to the puzzle.
So what is it about this project that has me excited? Well, I love the photography in it. Full-frame head-to-toe goalie pics are very cool. And I think highly of superior penmanship...and these goalies have it in spades.
I was at trade night  (yes, they're back) a week ago and pulled the trigger on this new add. 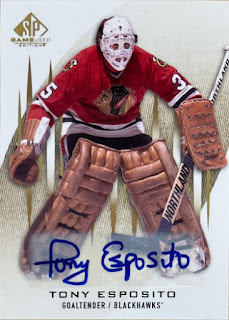 2013/14 Upper Deck Game Used
#78 Tony Esposito
A quick aside before I start gushing over the card. This September is the 50th Anniversary of the Summit Series and Team Canada's breathtaking win over the Soviets. There is a 4-part documentary series celebrating this historic time period in hockey and I absolutely can't wait for it. Many remember Ken Dryden in net, but Tony-O was a key piece of the roster that helped secure the stunning victory.
Now, to the card. This time period with Esposito (later in his career, when he adopted the partial cage on his mask) is what I remember when I think of Tony. It was the early 80's and he was an All-Star tender. This photo has it all - the slick leather pads, glove and blocker, that Northland stick, Original Six team, and of course...the mask. It's a beautiful pic.
Now, the autograph had me on the fence for a while. The other two cards in my small PC are hard-signed (and I am a sucker for on-card signatures). But this didn't feel like I was making an exception. Tony's script is legendary - easily recognizable. And with the recent passing of this goaltending great, I felt that this might be the best card of his to be a part of my collection.
It was an easy, confident purchase. I couldn't be happier.
Now, let's see if I can find a fourth card before the end of this decade.  :)
Posted by bamlinden at 3:23 PM