LINDEN CARD OF THE WEEK - Rare Air...And Some Thoughts

Hockey season is near.

I can tell because my fantasy league has geared up and the smack talk has already begun. The leaves are also starting to change and I no longer have to blast my AC overnight to get a good night's sleep.

I also find this point in the year as a bit of a restart with my collecting.

Summertime always used to bring a pause to the hobby - a break from the chase. A reset on what I was looking to go after. These days, the pursuit is a year-round thing (or can be) and the new releases never stop.

I've certainly slowed down over the past few years. Not from the search (I still do dozens of eBay looks a day), but from the purchase. Gone are the days of weekly charges to my credit card and bubble mailers stuffing my mailbox. Now, it might be weeks...or months between maildays.

That makes them all the more sweeter.

I've been saving this one to share for a few weeks as I wanted to make sure it got some special props. After all, it's not every day you land a card that's been on the wantlist for over two decades. 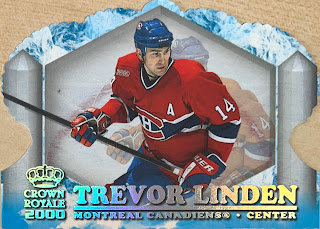 Straight up...I've never seen this card - ever. I didn't think I'd ever see one nor own a copy.  When I look at it now, it brings a huge smile to my face...but also a lot of thoughts. Let's enjoy the card first.

This was a time in my Linden collecting when he was in his prime in terms of being in products. Even though he had been shipped from Vancouver to the New York Islanders, and then Montreal, he was getting a ton of hobby love. And the parallels in those years were off the chart. It's the big reason why he's got over 2500 unique cards to his name.

This Ice Elite Die Cut is just a cool crown concept. A standard with the product, it just juts out as so unique for its time. 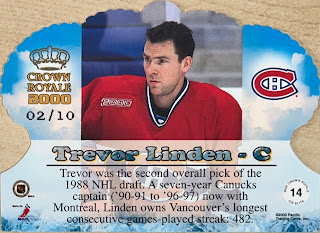 But it's that little stamped serial number that really puts it over the top. A card that would have been highly desired 20 years ago, still holds demand in my eyes all these years later. It was an instant thought of "I need to have this one" when I saw it. That doesn't happen much anymore.

That brings me to my thoughts on cards like this...and the hobby world for me at this point in time.

Why did I put extra emphasis on this card over say a card /10 from the past couple of years? Why is this one so overly desirable? What are the intangibles to the decision-making when it comes to cardboard?

I chased this card hard because it felt like it was a one-time moment. This could very well be the last time I ever see this card - ever. I don't feel that way when it comes to newer, rarer cards. I feel like they'd eventually pop up again (and in a lot of instances...they do).

My push to obtain this card I think came from the fact that I hadn't made a serious card purchase in a while. A quick eBay search shows me that this is just the sixth Linden card I've picked up this year off of the online platform.

To be a little more liberal and open my wallet up a bit more didn't make me feel like I was upsetting the apple cart. Would my mindset be different if I had just binged on a bunch of cards a few weeks earlier? With this one...likely not, but paying attention to how much I've spent recently did come into mind.

I had also just sold a card at a recent trade night. A cool profit that essentially paid for this card. It is the main reason why I paid what I paid (which I feel was a little more than the card is worth). I was in the mindset of "playing with house money". This card at the end of the day...cost me about $20 out of pocket. Can't beat that at all.

The situations that revolve around the moment of a purchase can absolutely affect the mindset towards a purchase.

How much have you spent recently? Did you sell a card or two in the past week? Have you picked up a lot of cards this year? It all matters.

And in that sense, I have zero regrets for the price I paid and how I went about landing this piece for the PC. Justifying a pickup is just as important as having the card in your hand. If you feel uncomfortable once you are holding the cardboard...ask yourself why.

Posted by bamlinden at 4:08 PM