TO THE BIKE SPOKES!! - Nighty Night

It's not that I haven't come across ugly cards over the past year....I just was too lazy to scan them.

So says the guy who has taken the better part of a year to add to the 'Spokes' collection.

But when I saw this card at the local card show this past weekend, I thought it was worthy of the .50 cents, the time to scan and the chance to catch up with all of you who love looking at terrible cards. And this card is terrible.

First of all, let me just state that this is not a hockey offering.  It's football. Canadian football at that.  Don't judge (at least based on our card making skills).

In addition to the brutal photo slapped on the front of this "Pro Action" card (and by the way....this card is neither 'Pro' nor 'Action'), the card has zero information on it.  Nothing on the front to indicate what I'm looking at (or supposed to see), nothing on the back but a big cartoon telling me to "Test Your Football IQ".

Hey, my IQ is being tested by trying to figure out what year this card is from, what players I'm looking at, and what teams are playing.

Is this a night game?  That would explain a lot.  I know somebody numbered 65 is doing something.  I'm also betting there's a football in the picture.

Man.....this must've been an awesome set to build.  I'd love to see what the rest of the offerings look like.  Can you imagine?

So I decided with my super-advanced photo-editing skills that messing with improving this photo was in order. 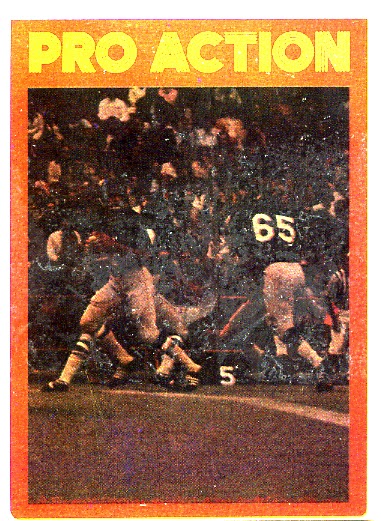 I dunno.....I've given up hope.  If any of you have magic powers or a Canadian football price guide maybe you can fire off some information.

Until then, I'm putting this card to bed.  Nighty night!